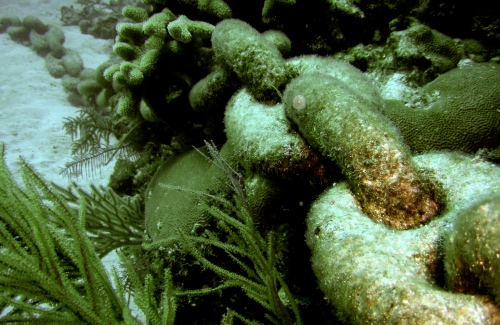 The chains holding Blacktip Island to the seabed were forged on site and installed by Public Safety Department scuba divers.

In an effort to keep Blacktip Island in place should it break free from its foundation, the Tiperon Islands Public Safety Department has installed chains to hold the Caribbean island to the seabed.

“Given the advanced stage of erosion under the island, we were concerned Blacktip might come loose and float away,” public safety spokesperson Rocky Shore said. “The last thing we want to be is a navigational hazard.”

“The bigger worry was if Blacktip drifted into someone else’s territorial waters,” added acting-mayor Jack Cobia. “I mean, a good south wind and we’d be part of Cuba in a day, day-and-a-half, tops. And I don’t speak a lick of Spanish.”

The island’s tourism professionals fully back the measure.

“This has been a huge worry among our scuba diving guests,” said Blacktip Haven resort owner Elena Havens. “They ask all the time if the island goes all the way to the bottom. Now we can take them down and show them the safeguards we have in place.”

“There’s no chance divers will surface and finding our island’s gone,” Club Scuba Doo manager Polly Parrett said. “That’s happened other places in the Caribbean, you just don’t hear about it. Tourism departments hush that sort of thing up.”

Government engineers teamed up with the island’s scientific community to design the mooring system.

“Every computer simulation we’ve run shows this is the best way to safeguard the island,” Tiperon University-Blacktip professor Ernest Mojarra said. “It’s not the easiest solution, or the cheapest, but these chains’ll hold up to a Cat Five hurricane without missing a beat.”

The chains are forged from a titanium alloy formulated to reduce corrosion and wear-related weakening. Individual links were manufactured on site due to their size and weight.

“It took every tree on the island to keep the forges hot, but that couldn’t be helped,” the government’s Shore said. “It was deforestation or public safety.

“We left plenty of slack to allow for tides and storms, so Blacktip’ll drift a bit,” Shore added, “but we’re only talking maybe a 100-meter total swing, max. Divers using landmarks on shore may have a little trouble finding dive sites, but not much.”

Environmental groups, while decrying the topside damage, are pleased with the shelter the chains will offer aquatic life.

“These big links going down, down, down from the surface will provide wonderful new habitat for species throughout the water column,” said Ginger Bass, Foundation for Ichthyologic Species Habitat president. “We couldn’t be happier about that.”

“It’ll be lovely once there’s some sponge and coral growth on the links,” Club Scuba Doo’s Parrett said. “Our chains will be one of the Caribbean’s premier dives in a few years.”