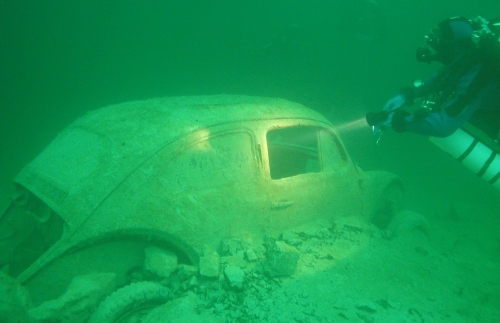 A scuba diver examines one of the vehicles swept away in Hurricane Wendy’s storm surge Wednesday. The car, and more than a dozen others, are now the small Caribbean island’s first underwater auto show. (photo courtesy of Achim R. Schloeffel)

“The storm was tracked to go way east of the island, so lots of folks parked their cars on the west side for protection,” island meteorologist Rayne Doppler said. “Problem was, the storm wobbled and came up the west side. All the cars parked by Diddley’s Landing public pier got swept out to sea.

“There’s no way to save any of them, and no way to get them out right now, so we decided to turn lemons into lemonade,” Doppler said. “The way they’re all strewn across the sand, it looks like they’re on display, so we decided to make it a car show. Scuba divers and snorkelers can swim around and check them out to their hearts’ content. For a fee.”

Island residents had mixed feelings about the new dive site.

“We’re thankful no one was seriously injured. Or died,” Sally Port said. “Unfortunately, a bunch of Nissans did, though. It’s a tragedy, really— some of them didn’t even have rust on them yet.”

Others praised the idea.

“Intentional or not, it got rid of a bunch of island beaters,” Chip Pompano said. “All the rust-buckets with leaking mufflers, cracked windshields and random wheel rims are gone. Now people’ll have to get newer vehicles. It’s beautifying the island, long term.”

“The supply barge docks at Diddley’s Landing, and it may not be able to land now,” public works chief Rocky Shore said. “We got divers out there now assessing whether it’s safe to dock, or whether cars are piled up so high they’re navigational hazards.”

“There’s at least a dozen vehicles down there, all of them leaking oil and gasoline,” marine parks spokesperson Val Schrader said. “That will negatively impact the surrounding reefs for months, if not years, to come.

“Our first thought was to haul them all out, but we don’t have the equipment,” Schrader said. “And even if we did, what would we do with them? The dump’s already full. For now, the damage is ongoing and we can’t do anything about it. They might as well turn it into a car show.”

“It’s an unprecedented in situ modern sculpture,” Marcia Chagall said. “It truly speaks to the futility of humanity pitting itself against nature. Anyone who dives out there will be struck by that juxtaposition. It also makes a great fish habitat. We can now be inspired by art while we catch dinner just offshore.” 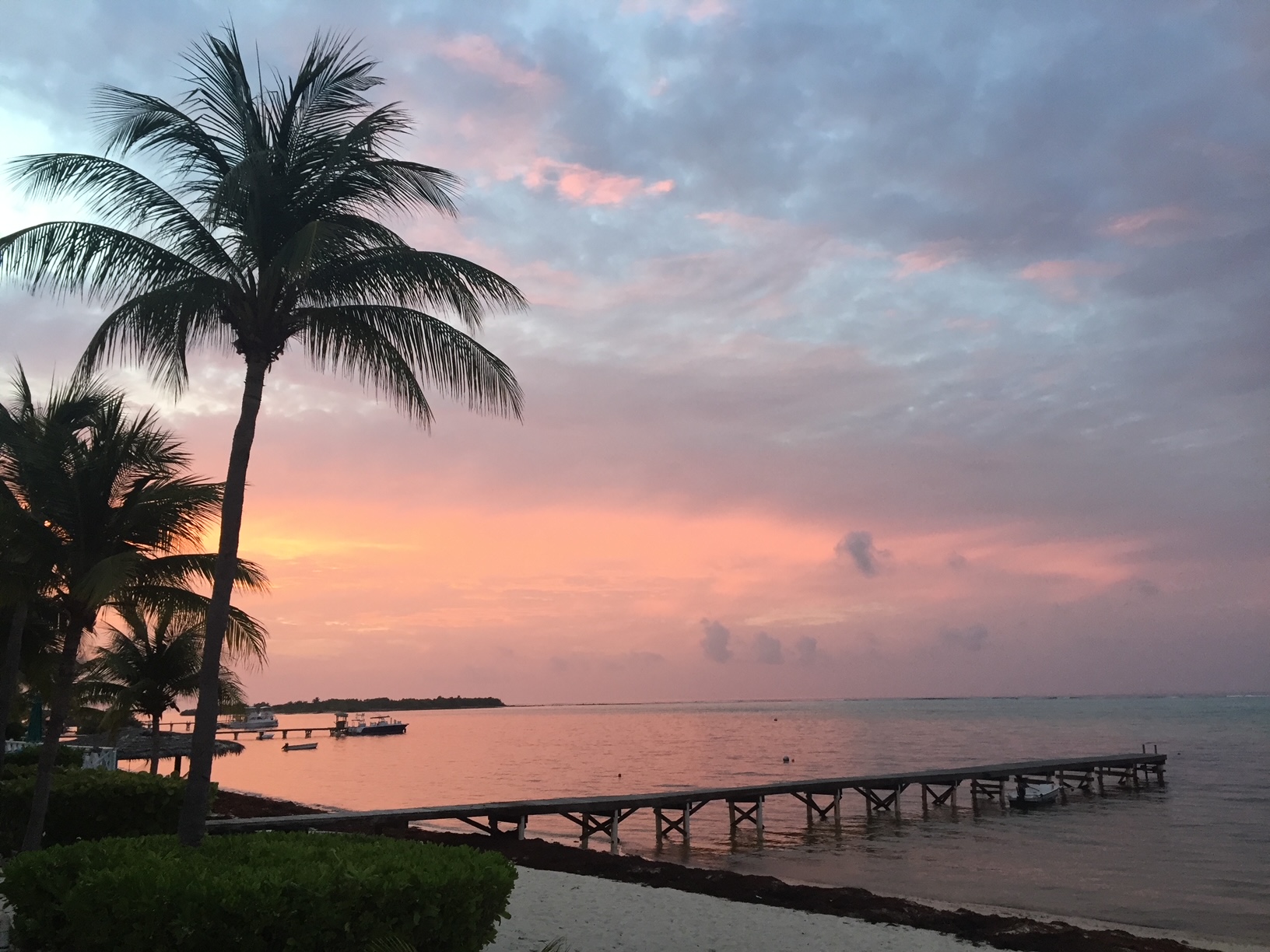 “This adds another outdoor activity to our island,” chamber president B.C. Flote said. “It being under water makes it all the more unique. It’s the first of its kind, and people’re already lining up to play. We’re calling it ‘Cukeball’ in honor of the sea cucumbers that’re all over the place out there.

“Pickleball’s one of the most popular sports these days, and we’re taking advantage of that,” Flote said. “The rules’re simple and anybody can play without fancy lessons or expensive gear. And now it’s a sport for every scuba diver.”

“We built the court by the public pier, where the coral’s all dead anyway,” Underwater Paddle and Pickleball Association president Lucille Ray said. “We had to modify the balls so they’d bounce properly underwater, and we put holes in the paddles to reduce resistance. We tried underwater pingpong, but the balls kept floating away.

“To stay down, most folks just strap dive weights to their feet,” Ray said. “A couple of people use lead boots from old hard-hat diving suits. It works better than we thought. The worst part’s clearing the sand off the court between games.”

“It’s great, low-impact aerobic exercise,” Frank Maples said. “And with a lot of us getting up there in years, it’s a great way to get a workout without stressing our hearts too much or having to worry about getting hurt falling.

“The games can get pretty heated,” Maples said. “Usually the winner’s the first one to get 11 points, but people go at it so hard, we had to implement an out-of-air forfeit for when folks run out of air and have to emergency-ascent mid-game. Happens more often than you’d think.”

The activity was not without its critics.

“Why can’t people be happy with just swimming around looking at fish?” Chrissy Graysby said. “This continual effort to make scuba diving a competitive sport is ridiculous. And how do they know coral wasn’t trying to re-establish itself on that court? It’s a reef, for Pete’s sake, not an underwater amusement park.”

Flote plans to expand the activity, despite the criticism.

“Cukeball’s all about socializing and camaraderie,” he said. “If that gets more people interested in the reefs and in protecting them, that’s a win for the environment. Chrissy needs to take an ease-up pill.

“Going forward, we have plans for a competitive league,” Flote said. “It’s proving popular for locals and tourists alike. We got a court reservation list a mile long.”

Cukeball t-shirts, caps, paddles and lead weights are available at the Chamber of Commerce shack onshore. 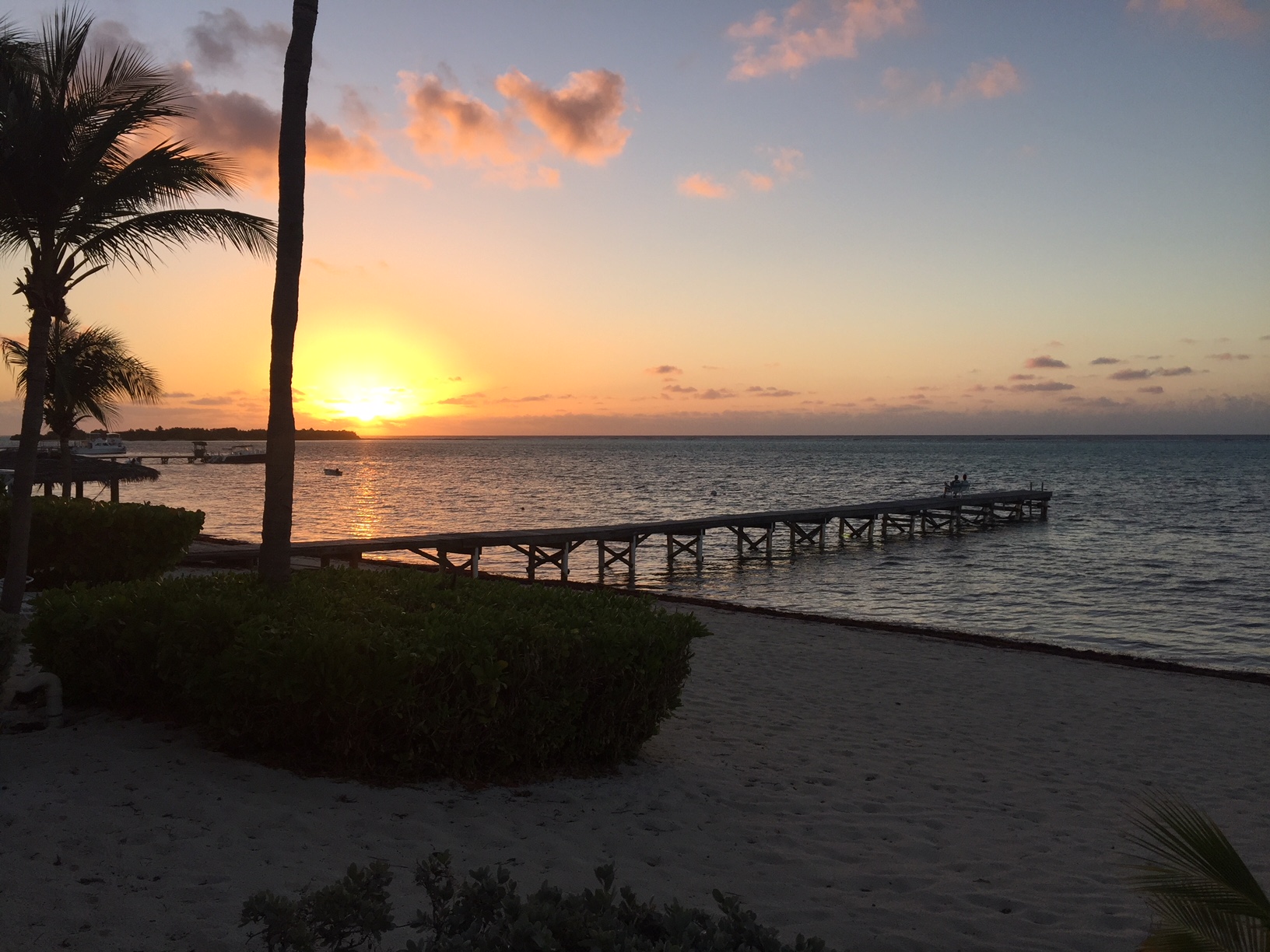 The upcoming Blacktip Island mayoral election turned nasty this week when multiple candidates accused their opponents of being various combinations of communists, socialists and fascists.

“Folks know me—I’m a laissez-faire sort of mayor, » Cobia said. “Everybody gets along and I don’t have to do too much. Folks respect that. And it makes for friendlier happy hours. Rocky’s the communist and socialist. This proves it.”

“Jack’s talk of everybody just getting along shows he’s all about mob rule,” Christina Mojarra said. “If that’s not communism, I don’t know what is. And his wanting people to always do things his way, that’s straight-up fascism. That’s not what Blacktip Island’s about.

“Look, I’m no socialist,” Mojarra said. “I just want Public Works to put up new stop signs, and fix the potholes. If that gets Rocky overheated, well, so be it. Thing is, though, Rocky and Sally are communist-fascists, too. It’s like an epidemic.”

“I’m not a communist, but Christina and Jack sure are,” he said. “Jack can’t fool us with his talk of laissez-whatsit. That’s just another word for communism, invented by the foreigners who cooked up the idea. All my opponents are communists, and socialists to boot, but I’m onto ‘em. Not fixing potholes don’t make me fascist. Blacktip voters’re smart enough to see that and vote accordingly.”

Sally Port brushed aside the criticism.

“I actually am a communist,” she said. “The Jacobin-Marxist model of the Paris Commune is ideal for Blacktip. It would give the island’s working people access to the reins of power and guarantee affordable housing for everyone. And we’re already self-policing. But I’m not a fascist or a socialist. The other candidates are all communist-socialist-fascists and are just trying to muddy the water. If people vote for them, well, they deserve what they’ll get.”

Island voters were surprised by the accusations.

“Dunno why all this nastiness popped up all of a sudden,” Dermott Bottoms said. “Known Jack and Sally and Rocky and ‘Stina for years. All good people. Don’t agree with any of them, though, so makes sense they’re all communists and socialists. I’ll get back to you on if they’re fascists or not.”

Local political experts were confused by the developments.

“Frankly, I’m hoping someone can explain it all to me,” Tiperon University-Blacktip political science professor Karl Engels said. “All these labels are being used interchangeably, and no one’s defining their terms. I’ve seen no indication anyone wants the government to take over the means of production or the means of distribution. On Blacktip most days, the government’s lucky to find its butt with both hands.”

The fifth mayoral candidate, former island mayor Leonard the hermit crab, has made no statement concerning his political positions. 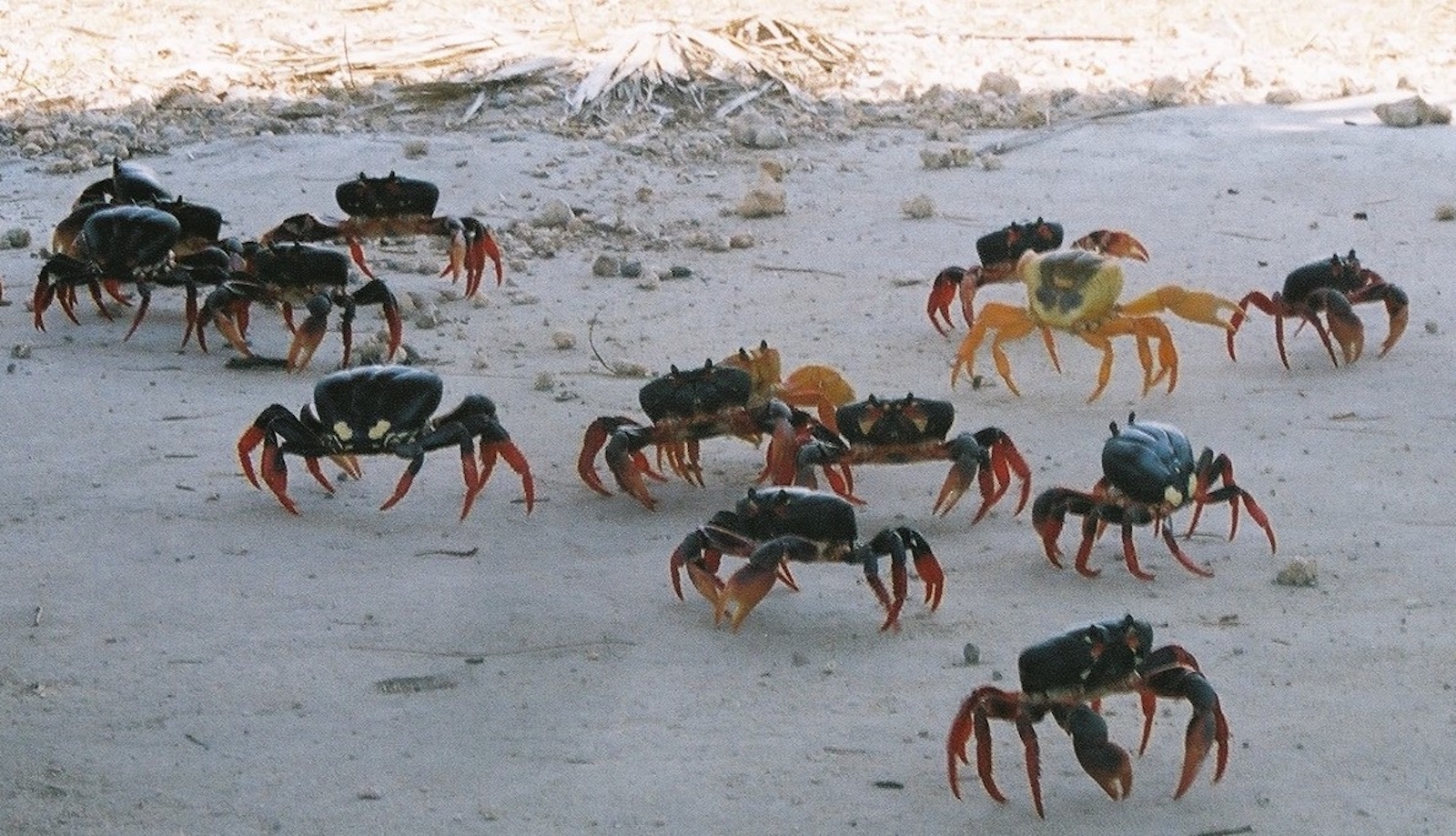 “Overnight, it seems, they all hatched out and are swarming over everything,” Goldie Goby said. “They’re all over the roads, clogging downspouts, filling cisterns and getting into all our cabinets. You can’t even walk anywhere without them crunching underfoot. It’s like a Biblical plague.

“Bigger worry, though, is old-timers say this always happens right before a big hurricane,” Goby said. “They call them ‘hurricane crabs’ because they mean a big storm’s coming. I’m battening down everything. And going to church twice a week.”

“Baby crabs flooding the island all at once, hurricane’s coming for sure. Everybody knows that,” Antonio Fletcher said. “Happened in ’04, then again in ’08. Blacktip was two islands then, storm surge was that high.

“I got water and food stashed in a cave, ready to weather it out,” Fletcher said. “Doubled the insurance on my house, too. Folks calling me ‘Chicken Little’ are in for a rude wake up. Sky really is falling. Or fixing to.”

Other locals were also busy with hurricane preparations.

“Me, I got my boat filled with supplies, and lashed to my roof,” Dermott Bottoms said. “Hurricane comes through, I just cut the cords and ride out the waves. Simple as that. Thanks to them crabs, I got enough warning to get that all set up.”

Scientists questioned the link between the crabs and storms.

“This mass hatching likely has more to do with rising water tables, or temperature change, than with future weather events,” island meteorologist Rayne Doppler said. “And I’ve found zero correlation between occasional island-wide hatching events like this and hurricanes. The only constant is these crabs hatch en masse every six or seven years. The last time this happened, we had no storms at all.”

“The roads are red from cars running over them—the stink’ll about knock you out,” Marina DeLow said. And they’ve taken over my underwear drawer. I kind of hope a hurricane does come along and blasts these damn things away.”