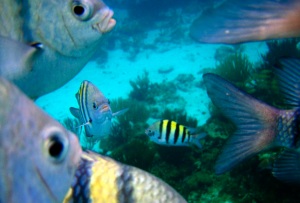 A close up of the suspected surveillance drones.

Blacktip Island scuba operators have filed a formal protest after leaked documents revealed some fish on the Caribbean island’s reefs may be disguised intelligence drones.

“There’s always sergeant majors schooling behind the dive boats,” Eagle Ray Cove dive operations manager Ger Latner said. “But there’s something’s fishy about these ones. They don’t eat the chips the guests throw overboard. They don’t bite chunks out of divers’ hands or ears, either. It’s not natural.”

“The things swim these tight circles around you without ever moving a fin,” divemaster Marina DeLow said. “And right in your face, eyes zooming in and out.”

The suspected drones have island visitors concerned as well.

“A school of them followed me, my wife and our little girls while we were snorkeling,” said vacationer Kenny Chromis. “They were all over us, clicking and whirring. The girls ran out of the water, screaming, to get away from them.”

“The only way to tell for sure if these fish are drones is to catch one and cut it open,” said government watchdog Wade Soote. “That won’t happen, though. It’s a marine park – taking fish is illegal. It’s the perfect scenario, really.

“I’d be surprised if it’s limited to sergeant majors. Those friendly Nassau grouper that let you pet them? Please. What better way to collect fingerprints and DNA samples? These devices are incredibly sophisticated.”

A national security expert, speaking on condition of anonymity, outlined possible reasons for the surveillance on Blacktip Island.

“You have a situation where hundreds of people from all around the globe are going underwater every day,” he said. “They’re off the grid for an hour and claim they’re looking at fish. That’s highly unlikely. Fish aren’t that interesting.

“These people are doing this two, three times a day for days on end. Some even talk about doing ‘training dives.’ My question would be what kind of training, who’s conducting it and why. This is potential security nightmare.”

The NSA would not comment on the reports, or on why the sergeant majors school thicker around divers sporting Speedo swimwear. The agency did, however, issue a written statement which read, in part: “There is no good reason for a man to be wearing a Speedo in public. Unless he’s European. In which case we especially want to keep an eye on him.”

Blacktip Island residents turned out in dozens Thursday to protest plans for a Lowest Depot do-it-yourself superstore slated for the island’s northern tip.

“We have the dump for all our DIY needs,” said protestor Palometa Fischer. “If they build this monstrosity, it’s the beginning of the end. Next we’ll have fast food, a cinema, hell, even a golf course. People move here to get away from those things.”

“It’s part of the island’s charm,” resident Piers Plank said. “I’d rather pick through my neighbours’ leavings than patronize some corporate monolith. If the landfill doesn’t have it, you don’t need it.”

Not all residents agreed.

“I think it’s brilliant,” said newcomer Ginger Bass. “Charm is charm, but not when your freezer dies or you want to build a festive patio out back. Then you need a proper bricolage.”

“We have no desire to ruin Blacktip Island’s unique character,” Goode said. “We don’t see it as merely selling appliances and building supplies. Our goal is to bring ease and convenience and quality of life to Blacktip Island. At our usual low, low prices, of course.”

Some residents worry the new store will destroy the sense of community the landfill fosters.

“We have no parks or piazzas or any sort of public space here,” Blacktip Haven resort owner Elena Havens said. “The dump is our de facto piazza, where people from all walks of life can gather. It’s a very nurturing place. Losing that would be tragic.”

“Making a dump run is family time,” Olive Beaugregory said. “We let the kids pick out something special for themselves while we hunt for any sundries we might need. Then we break out juice and sandwiches, cheer on the dump chickens and throw rocks at the rats. It’s affordable family fun. No megastore can offer that.”

“We need to reuse, repurpose and recycle the junk we have rather than import more,” Club Scuba Doo’s general manager Polly Parrett said. “Our dive boats are built 100% from parts and pieces salvaged from the landfill. We used to hand craft all our scuba rental gear from repurposed landfill items, too, but that became problematic. Our attorney still won’t return our calls.”

A photograph of Blacktip Island’s rumored mersquatch surfaced Thursday, confirming the existence of the legendary creature.

Island resident Molly Miller captured the image behind her house, where road crews have been clearing land.

“The dog was the first to notice it,” Miller said. “I was hanging laundry when Rufus started barking and carrying on. Then I caught a big, fishy smell, like a barra’ left in an ice chest overnight. And there he was at the edge of the trees, eyeballing me. I thought it was Jesse Conlee at first, but Jesse doesn’t smell like that.”

Miller said she ran inside for her camera and was able to take one photo before the creature disappeared.

“Soon as I made eye contact, he high-tailed it,” Miller said.

“It makes sense now, all the strange goings on. The howling.  The rocks and sticks raining down on the house late nights. Things going missing: bread cooling on the sill, beer from the ‘fridge, my frilly yellow sundress.”

An aquatic relative of the more-famous sasquatch and yeti, the mersquatch has been rumored to live on Blacktip Island and the surrounding reefs, but there has been no proof until now.

“People are always seeing big, hairy creatures,” Island Police Constable Rafe Marquette said. “Usually Friday and Saturday nights, late, around the Sand Spit and Last Ballyhoo bars. But that could be anyone on the island. And underwater sightings by scuba divers, well, that’s textbook nitrogen narcosis.

“I wouldn’t call this photo proof positive, but the eyewitness testimony combined with the photographic evidence is certainly compelling. This isn’t some rum-soaked tourist reporting it. It’s a rum-soaked local. With a camera.”

Hair and algae samples from behind Miller’s house have been sent to the FBI forensics laboratory in Quantico, Va. for DNA testing.

The island’s academic community is excited about the photo as well.

“The bluff is riddled with caves leading to flooded sinkholes and on out to the sea. A mersquatch could come and go up there without anyone noticing.”

Authorities are urging caution from island residents and visitors.

“We don’t know what this creature was doing in plain sight, or how many more are out there,” IPC Marquette said. “If there’s a population, the cooler weather may be bringing them out. They may come into town looking for food. Or mates.”

“I’m keeping both eyes peeled, I can tell you that,” Miller said. “I got fresh bread and cold beer out back of my place. He was kind of cute, in a rugged sort of way.”

Island To Be Paved For Mosquito Control

Public health officials announced Thursday all of Blacktip Island will be paved to combat the growing mosquito menace threatening the small Caribbean island.

“The mosquitoes are out of control,” Tiperon Islands Public Health chief Ferris Skerritt said. “Residents are complaining. Resort guests are complaining. The potential for malaria, dengue fever, yellow fever, ugly red welts, it’s hurting tourism, and that’s the hand that feeds us all.

“Standing water’s the issue. That’s where they breed. Get rid of the water, you get rid of the mosquitoes. Problem’s always been getting to all the pools on the island, and keeping them drained. Covering the island completely in a protective sheath of asphalt and concrete will solve those problems.”

Not all island residents are happy with the decision.

“With no ponds, there’ll be no bird habitat,” longtime resident and Blacktip Audubon Society president Nelson Seagroves said. “That, by itself, will kill tourism. Birders flock to Blacktip this time of year for the flyway migrations. It’s a stopover point for birds going between North and South America.”

Other locals are concerned about the project impacting their more basic needs.

“We rely on groundwater for drinking, cleaning, everything,” said resident Hugh Calloway. “If the island’s paved, where will we get water to survive?”

“We’ll be building a state-of-the-art water desalinization plant as part of this project,” MacAdam said. “There’ll be more water, cleaner water than ever before. Residents will be able to purchase as much as they need.

“As for the birds, they draw feral cats, another public health threat. Bird flu’s a concern as well. Also, these migratory birds are non-native. They can’t be allowed to slow progress in this country.”

The first area slated for paving is the nature preserve adjacent to Eagle Ray Cove.

“It’ll be unsightly for a while, sure,” Eagle Ray Cove owner Rich Skerritt said. “But we’ll pretty it up with a new block of rooms and a swimming pool to maximize our guests’ vacation experience.”

The contract for the project has been awarded to Skerritt Construction and MacAdam Paving, raising concerns about possible conflicts of interest. Both the Skerritts and MacAdam brushed aside those concerns.

“This is about public health. Period,” Ferris Skerritt said. “And the economy.”

“For the good of the community, Blacktip Island needs to be paved,” MacAdam said. “And I’m just the man to do it.”

“This isn’t over,” the Audubon Society’s Seagroves said. “We’re going to fight beak and claw. This one’s for the birds.”