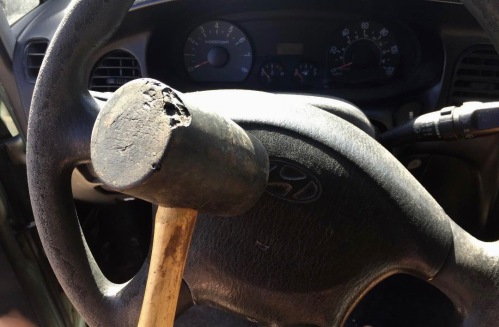 “The thing started as a simple auto airbag safety check, but so many people showed up to watch, we made it a contest to get as many cars inspected as possible,” public safety head Stoney MacAdam said. “Most airbags on the island are disasters waiting to happen, what with salt air rotting the contacts. Airbags don’t go off in collisions, or they’ll go off mid-drive with no warning.

Residents say the competition builds on an island tradition.

“It’s been an unofficial bar game for years,” Jerrod Ephesians said. “People in the car parks after the pubs close dare each other to hit their airbag covers. It started when James Conlee passed out, his head hit the wheel and BOOM! James barely noticed.

“It’s not for the faint of heart,” Ephesians said. “A bag goes off, it’ll mess you up bad. You can feel the tension build with each round. No one knows what’ll happen with each whack.”

Officials say the rules are simple.

“It’s a single-elimination, multi-round format,” public safety chief Herring Frye said. “The airbag deploys, you’re out. It doesn’t, you move on to the next round. And you’re disqualified if the crowd thinks you half-assed your whack or you lean back too much.”

“Car assignment’s totally random,” Frye said. “You can drive up in a new Honda, but draw a 20-year-old Land Rover from the hat. Those are the scary ones. British engineering’ll smack you in the face every time.”

Some in the community questioned the need for the event.

“Encouraging safety’s great, but this is really making light of a serious concern,” shopkeeper Peachy Bottoms said. “I mean, what’s next, a ‘who can drive at night without headlights’ race? Who can bail out of a burning car?

“More people are injured in Boom-Fest than in auto accidents,” Bottoms said. “And the losers use up critical medical resources. Why not just test airbags with no one in the car? Or take your chances on the road?”

“Medical staff is standing by, when possible, and we order all kinds of extra supplies for the clinic,” MacAdam said. “It’s worth the expense. It’s cheaper to treat a Boom-Off victim than an auto accident victim. And this ensures every vehicle on the island gets tested.

“We’re doing a round every Saturday to make sure everyone gets the chance to see at least one competition,” MacAdam said. “Worst case, we run out of cars before we have a clear winner. But at that point all the island cars will have been inspected.”

Contestants, meanwhile, were eager for Saturday’s second round.

“It’s like a jack-in-the-box, but full contact,” standings leader Dermot Bottoms said. “Trick is to have a few rums before you get in. After a couple of times, you get to where you kind of like it when the bag goes off.”

A 2014 photo of the Blacktip Island mersquatch, the only known picture of the elusive and secretive aquatic relative of the more widely-known sasquatch. (photo courtesy of Molly Miller)

“The mersquatch is the mostly-aquatic relative of bigfoots and yetis,” Shore said. “It’s native to Blacktip and loves it down south where there’s not a lot of people and the island’s eat up with caves and sinkholes leading out to sea.

“We’ll be taking folks In Jeeps and on foot on overnight trips in the interior to see if we can get a look at him,” Shore said. “They’ll also see iguanas, hermit crabs, land crabs, grackles, no telling what, but the brass ring’s the mersquatch. There’s no guarantee, of course, but that’s the goal.”

Some residents scoffed at the idea.

“The mersquatch is a bunch of hooey, and Rocky knows it,” Ginger Bass said. “He’s charging a small fortune to take people out in the bush to get bug bit. Any ‘signs’ the guests find’ll be Rocky’s buddies off in the bushes howling and breaking branches.”

Others were more supportive.

“People say there’s no mersquatch, but I saw him first-hand, four years ago now,” south end resident Molly Miller said. “Got a quick picture, too. Right after he stole my sundress. The worry isn’t Rocky finding the mersquatch. it’s what happens when the mersquatch finds him?”

“I can’t speak to whether this what’s-it exists, but anything that brings visitors to the island is good,” island mayor Jack Cobia said. “Blacktip’s definitely lacking in topside activities, so Rocky’s camping trips are a perfect addition to our tourism product.

“Rocky’s quite the entrepreneur, I’ll give him that. He created a demand, then supplied the product,” Cobia said. “This’s already working out better than his Atlantis tours in the glass-bottom boat. And clicks on the island’s website have jumped through the roof.”

Guests on a test safari this week raved about the experience.

“It was as exciting as a big-game photo shoot,” Maria Pompano said. “We were never sure when the mersquatch would leap out from behind the trees. Or tear through our tent at night. The guide wasn’t armed, either, so that added to the rush.

“We didn’t find the mersquatch, but there were a lot strange noises at night, and some broken tree limbs. And scat. Lots of scat, so we were close,” Pomano said. “Sure, the mosquitos were hellish, but we got a t-shirts and water bottles, so it balanced out.”

Shore brushed aside the safari’s critics.

“Whether we find the mersquatch or not is beside the point,” he said. “People are getting an exciting nature tour, and loving it. And, really, are you more likely to pay top dollar for a ‘nature tour’ or a ‘mersquatch safari?’” 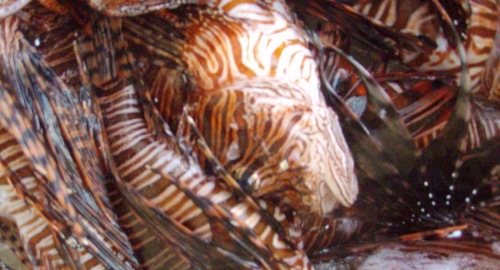 A shortage of invasive Indo-Pacific lionfish on Blacktip Island reefs has prompted local aquaculturists to launch a captive-breeding program this week to supply lionfish to island restaurants.

“We’re victims of our own success, really,” Blacktip Haven chef Jessie Catahoula said. “We put lionfish on the menu to encourage scuba divers to cull them off the reefs. The cullers did such a good job, there’s no lionfish left.

“Problem is, we’ve marketed the hell out of fresh lionfish tacos, ceviche, medallions, you name it,” Catahoula said. “Tourists come here expecting lionfish, and boy, do they get hacked off when we don’t have any. Flying the meat in from the big island’s killing our bottom line. Thankfully the fish nerds stepped in.”

Resident aquarium enthusiasts floated the idea of a fish farm.

“The restaurants tried substituting other types of fish, but customers caught on,” George Graysby said. “Captive breeding was the only viable solution. We have lots of aquariums, so this isn’t really that big of a jump.

“We still push culling and conservation and all, but going forward all the lionfish served on Blacktip will be farm raised,” Graysby said. “Farm-to-table lionfish, if you will. And we’re working on genetically modifying them, too, to make them venom-less. And bigger.”

“Lionfish is set to be the new tilapia,” Tiperon University-Blacktip economics professor Sally Port said. “Digging the ponds is already keeping two people employed full time. And once the place is up and running, it’ll need a full-time staff to maintain it.

“It’ll be six months before the first fish are ready for harvesting, but at that point, the process will be self sustaining,” Port said. “George and Belinda are starting the fry in aquariums this week and will transfer them to the ponds as soon as, well, as soon as the ponds are completed.”

“We’ve spent so much time and energy getting rid of these invasive pests, now George’s actively breeding as many of them as he can?” Harry Pickett said. “What happens when a big storm washes thousands of lionfish onto the reefs?

“They’ll wipe out the native reef fish in no time,” Pickett said. “We’ll be worse off than before,” Pickett said. “This is an ecological disaster waiting to happen, never mind the stink a farm like that’ll create.”

Farm backers brushed aside such worries.

“We’re digging the farm way inland where it’s safe from any storm surge,” Belinda Graysby said. “And it’s up by the Tailspinner bar where it won’t bother anyone. And even if it does, if the booby pond stink doesn’t scare people away the smell of a fish farm won’t, either.

“Worst case, if a big hurricane does flood the ponds, well, we’ve got an island full of trained cullers who can clear the reefs in no time,” she said. “Either way, the restaurants’ll get their fish.” 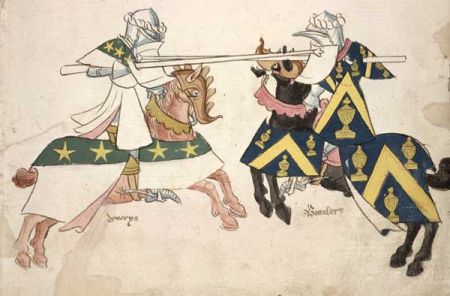 Detail from the marquee at Blacktip Island’s new medieval-style dinner theater, which opened this week at the Caribbean island’s public pier. (image courtesy of Piers Planck)

“On Blacktip the focus is on scuba diving, fishing and bird watching, and rightfully so,” said show impresario Piers ‘Doc’ Planck. “But the island has so much more to offer. That’s what we’re tapping into with this Middle Ages-style dinner-and-tournament.

“Most people don’t know Blacktip Island was a Knights Templar outpost in the 11th Century,” Planck said. “It was the Order’s sole naval base in the Western Hemisphere, and the survivors of the Friday the 13th massacre escaped to Blacktip with what was left of the Templar treasury.”

Show organizers are still fine tuning many of its details.

“We’re still feeling our way with staging and choreography,” Rosie Blenny said. “It’s mostly James Conlee and Dermott Bottoms in second-hand Aquaman costumes and pool floaties whacking each other with bamboo poles and yelling ‘thee’ and ‘thou.’ But tourists love it.

“We made it aquatic-themed so it was more relevant to island visitors,” Blenny said. “Marketing’s tough, but that’ll change as word spreads. Knights in tights jousting with inflatable seahorses? That’s something people’ll tell their friends and neighbors about.”

The island’s business community is upbeat about the venture.

“Anything that gets people to the island is good, no matter how goofy it is,” Chamber of Commerce president Christina Mojarra said. “They’re staging it at Diddley’s Landing for now, and the audience brings its own chairs, but if this thing takes off, we’re looking at building a permanent stadium that can be used for other events, too.”

Not all island residents support the new show.

“The idea of the Knights Templar having a presence on Blacktip Island is ahistorical hooey,” island historian Smithson Altschul said. “It was the Hospitallers. Tourism income is all well and good, but not at the expense of historical fact.

“And Antonio Fletcher dressed as King Neptune presiding over the affair undercuts any Society for Creative Anachronism-style educational value it might have,” Altschul said. “It is hard to look away from, though. Like an auto accident or a boat wreck.”

Island visitors were generally positive about the show.

“I didn’t really get what was going on, or what the point of it was, but it was fun to watch . . . whatever it was,” Eagle Ray Cove guest Otto Korrecht said. “Honestly, if I understood it I may not have liked it as much.

“The food was, well, the ‘Templar Conch Chowder’ and ‘Hospitaller Halibut’ were dodgy, and the ‘Holy Land Ale’ was just warm beer with limeade in it,” Korrecht said. “But you didn’t really notice during the jousting, though. I’m guessing that’s a big part of the business model.”