Blacktip Island Motorist Gets Award For Turn Signal Use 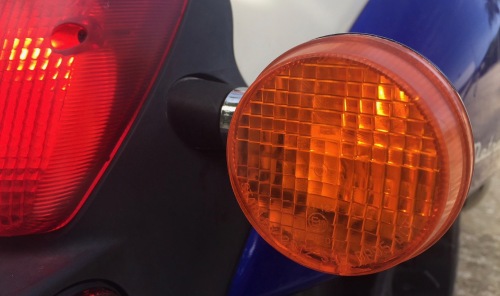 A longtime Blacktip Island resident was awarded the Tiperon Islands Safety Commendation Medal Wednesday after it was confirmed he was the first island motorist to use a turn signal.

“I was gobsmacked,” said witness Cori Anders, who videoed the incident with her cell phone. “It happened right in front of Sandy Bottoms. A dozen of us were there. No one had ever seen anything like it on Blacktip. It took a moment to sink in.

“James Conlee had to wait for a big Skerritt Construction truck to pass by before he turned into the car park for happy hour,” Anders said. “I suppose he got bored and reckoned he’d fiddle with the signal lever. He apologized afterwards.”

Authorities awarded the medal to send a positive reinforcement to the community.

“We want to encourage this kind of thing on the part of all residents,” Island Police Constable Rafe Marquette said. “Especially with the increasing number of cars on the island and the busy spring tourist season approaching.”

Many on the small Caribbean island were stunned by Conlee’s action.

“All island cars have turn indicators, but no one uses them,” resident Payne Hanover said. “There’s two roads and a half-dozen parking lots. Why bother?

“Sometimes people hit their indicator out of habit, but the wiring’s usually toast, or they have burned out bulbs. The store doesn’t even carry replacements. There’s no market for them. James got caught up in the perfect storm of flipping a switch and having it actually work.”

Some residents see the award as a slippery slope.

“What do we need with turn signals?” B.C. Flote said. “Since day one, folks’ve made unannounced turns whenever they wanted, and no harm done. Now, people start using turn signals, the next thing you know, Rafe’ll be handing out seatbelt fines and speeding tickets. It’s another sign this island’s getting too crowded.”

“Not right, like I’m a hero or anything,” he said. “Just did what anyone would’ve done if they’d been in that situation after drinking all day. Blame it on the rum, you know?”

After the award ceremony, Conlee was fined for not registering the 1987 Toyota Corolla since 2013. The vehicle failed a subsequent safety inspection for roadworthiness and was towed to the island’s landfill. 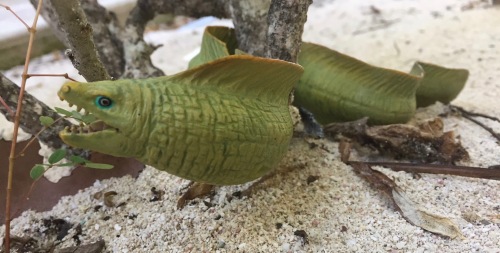 A Blacktip Island ground eel crawls past a game camera in a Blacktip Island mahogany grove Thursday evening. A sudden uptick in eel numbers has the Caribbean island’s tourism industry concerned about their impact on hotel bookings. (photo courtesy of Blacktip Island Chamber of Commerce)

A surge in the Blacktip Island ground eel population has island residents on edge and guests panicking this week, causing local businesses to scramble for ways to combat the creatures.

“Ground eels are incredibly rare. We know little about them,” said Goby Graysby, marine biology chairman at Tiperon University-Blacktip. “They’re akin to aquatic morays, but adapted to breath air. This is the first time there’s been a population explosion like this, and we have no idea what caused it.

“The problem is, they’re slimy, they’re smelly and they get into everything. And now there’s a ton of them,” Graysby said. “They’re like hagfish on steroids and can wiggle under doors, down vents and up toilets. They’re normally a solitary species, but in numbers this large, apparently, they can be problematic.”

Island hoteliers say the creatures are wreaking havoc among tourists.

“The eels love sunscreen. And hair gel,” said Sandy Bottoms Beach Resort manager Kay Valve. “They gobble the stuff up and look for more. Most locals don’t use that crap, so for us it’s not so bad. Resort guests, though, they can’t sleep or eat or even sit by the pool and read.

“God help you if you have sunscreen on you,” Valve said. “Yesterday a swarm of eels got on one of our docked dive boats and gnawed everyone raw. We have guests cancelling left and right. And the sunburns have been horrific.”

“We expected mosquitos and flies and ants and scorpions, but these eels threw us one hell of a curveball,” said Eagle Ray Cove guest Harry Blenny. “They wormed into our room last night and ate everything in my Dopp kit. And what they did to my wife’s hair while she was sleeping! We had to shave it all off. We’re leaving and never coming back!”

Some locals say the problem is a decline in the eels’ natural predator.

“The mersquatch usually keeps them in check,” said longtime resident Molly Miller. “What we need is a second mersquatch. Or a livelier one.”

The Chamber of Commerce has declared an island-wide state of emergency.

“We put a bounty out on the suckers,” Mayor Jack Cobia said. “Problem is, they’re damned hard to catch, or kill, because they’re so slimy. And nocturnal.

“We got teams in headlamps hunting them with sticks and machetes and golf clubs, but those eels’re damned savvy,” Cobia said. “Shine a light on them, they slither off right quick, leave you clubbing slime trails.”

Island scientists, meanwhile, hope to capture some of the elusive creatures for study.

“We keep setting traps, but the eels can get out of about anything,” Graysby said. “And the few we have caught slip out of any container we put them in. Mason jar with holes punched in it for air? They’ll screw the top off from the inside – they generate that much torque.” 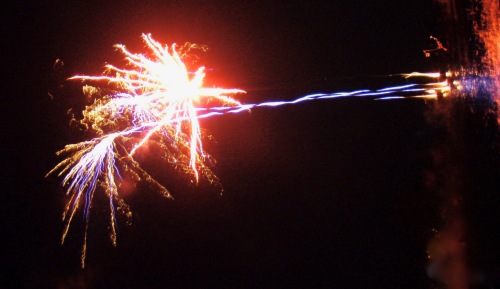 “We went to get the mortars and launch tubes and whatnot from the shed and found nothing but shredded cardboard tubes,” Blacktip Island Commission for the Holidays chair Jay Valve said. “All the powder inside the tubes was gone.

“We thought it was maybe kids, but kids’d have just shot everything off, not destroyed them,” Valve said. “Some people blamed PETA, thinking they’d done it to protect household pets. Turns out, it was stranger than that.”

Officials did not discover the true culprit until later that night.

“We were still scratching our heads about it, then James Conlee flicked a cigarette butt at a crab on the bar deck and, BOOM!, red and blue starbursts shot everywhere,” BICH safety officer Marlin Bleu said.

“It was like a box of Roman candles exploded,” Bleu said. “Knocked a half-dozen guests off their bar stools. I’m not sure they realized it, though.”

Scientists say negative wildlife interactions with the island’s human residents is rare, but not unheard of.

“We’ve had iguanas knock out power island-wide,” Tiperon University-Blacktip wildlife management professor Christina Mojarra said. “We’ve had the mersquatch pee in all the cisterns. But we’ve never seen anything like this.

“Land crabs will eat anything – rotted food, soap, ant bait – all without any ill effects,” Mojarra said. “I wouldn’t have thought they would find explosives tasty, but if they can eat fertilizer, I guess anything’s possible.”

Authorities have warned residents to keep open flames away from the island’s crabs until the explosives can metabolize out of them.

“There’s no telling how long it’ll take before the crabs are non-explosive,” Island Police Constable Rafe Marquette said. “We’re working with biologists to estimate a safety window, but it’s all trial-and-error guesswork at this point.

“You can tell which crabs ate fireworks because their shells kind of glow at night,” Marquette said. “Like the northern lights, but with legs and claws. We hope the colors will fade as the explosives wear off.”

Many residents put a positive spin on the events.

“The crabs may have been a New Year’s Grinch, but we had a good time anyway,” resident Ginger Bass said. “The kiddos chased the smaller crabs around with sparklers to set them off. Some shrubbery around the resort got scorched, but it created a festive mood. And little Shelly Bottoms’ eyebrows should grow back just fine.”

Others were happy crabs had eaten explosives.

“Gives them a nice flavor,” resident Dermott Bottoms said. “Gotta steam them slow, and handle the meat gentle, but it makes a fine extra-spicy crabmeat salad. Gonna miss them when they’re gone.”