Rum and chicken wings are health foods with the new Pirate Diet.

A Blacktip Island nutritionist is promoting a new eating regimen, dubbed the Pirate Diet, that promotes healthy weight loss by replicating the eating habits of 16th– and 17th-Century buccaneers.

“This is no fad. The diet’s rooted in science and historical fact,” said nutritionist Leah Shore, the diet’s creator. “It incorporates everyday, modern foods that mimic the foods our pre-industrialized forebears thrived on.

“Our ancestors were raised on this stuff,” Shore said. “It’s in our DNA. We’re simply not hardwired for salad and soy and light beer.”

Shore maintains the diet causes the body to catalyze stored fat into lean muscle due to meals high in protein, fat and rum.

“I’ve been eating pirate style for months now, and I feel fantastic,” divemaster Marina DeLow said. “Plus, there’s no calorie counting. I eat what I want, drink as much as I want and pass out before I can overeat.”

“Piraters engage in alternating days of cutlass fighting, ship boarding and planking,” Shore said. “Walking on planks, that is. Long rest periods are essential, too, preferably in a hammock.”

Local health professionals, however, are critical of the diet’s historical basis.

“It is impossible to know what 17th-Century buccaneers ate,” said Dr. Azul Tang of Tiperon University-Blacktip. “We do know they had notoriously-short lifespans, though, and there is zero evidence of anyone in the 1650s living on hot wings and Flor de Caña.”

“This sort of fad diet can wreak havoc on the human body,” Tang said. “Take a look at any of this island’s divemasters.

“And none of the diet’s proponents have addressed its associated memory loss and verbal aphasia,” Tang added.

Shore was quick to defend the diet.

“After a few months you might catch yourself slipping into odd speech patterns,” Shore said. “And you may notice a heightened fondness for parrots. But the health benefits far outweigh a few minor side effects.”

“When first I heard of this diet I thought to meself, ‘Ar, that be a pile o’ guano,’” DeLow said. “But here I be, fit as any two seafaring men with wooden legs.” 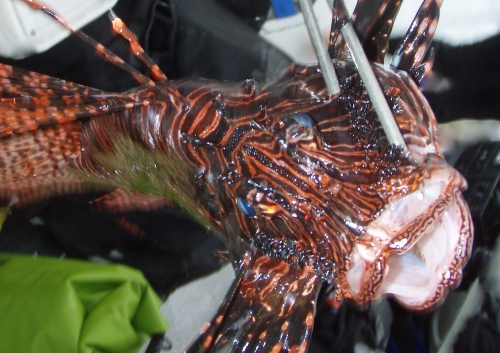 One of the invasive Indo-Pacific lionfish run to ground in last spring’s Hunting of the Lionfish.

“These yahoos have turned population control into a blood sport,” Blacktip Island People for the Ethical Treatment of Animals president Harry Pickett said. “Lionfish are part of the ecosystem now, like it or not, and these barbarians are inflicting unnecessary suffering for the sake of entertainment.”

Hunt organizers rushed to defend the Hunt as a means to combat the invasive red lionfish that have overwhelmed Blacktip Island’s reefs.

“It’s not barbaric, it’s pest control,” Hunt Master Jay Valve said. “Lionfish are vermin. If they eat all our reef fish, what happens to our tourism product?”

“The Hunt maximizes limited resources,” said Red Reynard, the Hunt’s Master of the Grouper. “There were too many lionfish and not enough divers, or bottom time, to keep them in check.

“We turned the tables by importing specially-trained English scent-groupers to chase them down,” Reynard said. “We loose the grouper, have our whippers-in shoo them in the right direction, and the hunters follow on underwater scooters, gigging any stripeys that go to ground.”

The use of grouper draws the most criticism.

“Proper wildlife management procedure is to simply spear the lionfish, one by one, not chase them across the reef and let big fish tear them to shreds,” PETA’s Pickett said.

“The Hunt is morally wrong,” Society for the Prevention of Cruelty to Piscines member Edwin Chub said. “Lionfish have a right to life, just as any other fish. And these allegedly-trained grouper are indiscriminate. They kill parrotfish, squirrelfish, anything that doesn’t get out of their way fast enough.”

Island authorities are urging caution from protestors and hunters after an attempt to disrupt last year’s hunt went awry.

“The SPCP people dressed as lionfish, rubbed fish guts all over themselves, then scuba dived through the middle of the chase,” Island Police Constable Rafe Marquette said. “It was mayhem, with chunks of flesh and lionfish costume flying everywhere.

“The hunters made it worse, goading on the grouper with those underwater horns hooked up to power inflators.”

“We were lawfully monitoring the Hunt for animal cruelty,” Chub said. “Our attorneys are still pursuing aggravated assault charges.”

“Those fish hippies had it coming,” Reynard said, “but it was frightening to see what a pack of hunting grouper can do to an unsuspecting diver. The same will happen this year, too, if they vex us again.”

“Two and a Half Weeks” is a 2015 Readers’ Choice Awards finalist.

“Two and a Half Weeks,” a humorous short story by local author Tim W. Jackson, has been nominated in the Big Al’s Books and Pals 2015 Readers’ Choice Awards short story category.

Big Al’s Books and Pals is an independent online review site focusing on work produced by small and independent presses. Contest winners in 14 categories are determined by reader votes and will each receive a digital slap on the back and a PDF sticker to Photoshop onto their book’s cover.

“It feels slimy as hell, but, I’m asking you, the Blacktip Times readers, to go to Big Al’s website and vote for my story before March 28,” Jackson said. “And if it doesn’t make you feel slimy, it’d be great if you got your friends to vote, too. And your families. And any unusually-dexterous pets you might have. Or know about.”

If the story wins, Jackson has promised to dance the quadrille in a giant banana costume and post video on the Blacktip Times Online.

“No one wants to see it, but if that’s what it takes, I’m not above extortion,” Jackson said.

Originally published in The MacGuffin literary journal, “Two and a Half Weeks” is part of Jackson’s Tales From Blacktip Island short story collection. 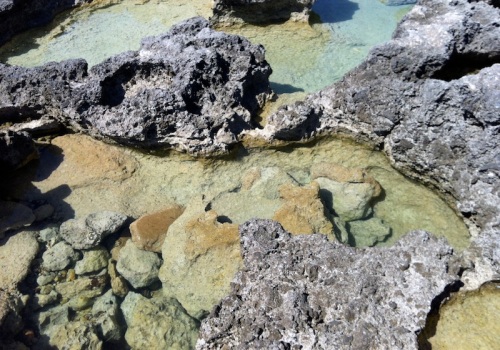 A sinkhole at Blacktip Island’s limestone quarry has been converted into a state of the art shore diving entry point.

A setback at Blacktip Island’s limestone quarry has yielded unexpected benefits for scuba divers after a local entrepreneur converted a sinkhole into a shore diving entry site.

“That hole opened up when we were blasting,” said Department of Public Works chief Dusty Rhodes. “I mean, BOOM! And water spewed up like Old Faithful. Flooded the quarry. Sunk three gravel trucks.”

“Damned if we didn’t tap into a flue that runs out to the sea,” Rhodes said. “Whole site was a total write off until ol’ Doc Plank stepped in.”

“This limestone chute’s a stroke of luck,” Bamboo You dive equipment founder Piers ‘Doc’ Plank said. “Too often rough seas make beach entries and exits impossible for scuba divers. With this tunnel starting a quarter mile inland and coming out 40 feet deep on the wall, shore divers can get in and out safely 365 days a year.”

The tunnel was modified to further ensure diver safety.

“We’ve rigged a hydraulic piston to whoosh divers out the chute to eliminate the danger of a half-mile cave dive,” Plank said. “To bring divers back in, we just reverse the process.”

Island divemasters volunteered to test the launch and retrieval system.

“First time, I shot out like a torpedo,” divemaster Alison Diesel said. “Scared the bejesus out of a reef shark, and I’m still trying to get the inside of my wetsuit clean.”

“When they suck you back, you pop out that chute like a cork from a champagne bottle,” divemaster Gage Hoase said. “This morning Lee Helm did a double gainer before he dropped back in. It was beautiful to watch. From a distance.”

Bamboo You has produced a variety of chute-specific bamboo diving accessories including helmets, neck braces and body armor. They will also offer a cleaning service for soiled wetsuits.

Plank and Rhodes said divers who don’t wish to dive in the ocean are welcome.

“Most people learn to scuba in a quarry, then come dive in the warm Caribbean,” Plank said. “Well, here you can learn in the ocean, then dive in a quarry. For a fee, of course.”

“We’re stocking the place with carp and catfish,” Rhodes said. “And we got a line on an old school bus and a couple-three lawn mowers we’ll add to the sunken gravel trucks to enhance the quarry experience.”

“A lot of our guests felt left out,” resort owner Sandy Bottoms said. “Scuba golf reaches out to a broader demographic eager for underwater activities and topside attractions.

“It’s the first of its kind in the Caribbean,” Bottoms said “There was a place over in China tried it last year, but their caddies kept drowning.”

“Another challenge is mantis shrimp claiming the holes,” Shore said. “We shoo them out, but they scuttle right back. Then one claw snap and BAM! your ball’s in a hundred pieces.”

Resort guests had mixed reactions to the new activity.

“I like to dive, and my wife likes to golf,” visitor Buddy Brunnez said. “Now we can dive and golf together. I’m not sure that’s a good thing. For either of us.”

Non-golfing divers complain the course is laid out across a dozen of the island’s most popular dive sites.

“And what of the habitat destroyed creating this atrocity?” Haven said.

“We chose sandy areas for each hole,” Bottoms said. “There was no need to landscape. Well, not too much, anyway. And our course rule is you add a stroke to your score every time you damage coral.”

For island dive professionals, safety is a bigger concern.

“You can yell, ‘fore’ all you want down there, but no one’ll hear you,” said divemaster Marina DeLow. “I had two divers get plunked today. And playing 18 holes, they’re gonna have yahoos blowing their no-decompression limits left and right.”

“We put all these holes in 20 feet of water or less,” Bottoms said. “Getting bent shouldn’t be an issue. Unless you’re a bad golfer. Or get a hole with a mantis shrimp in it.”

Bottoms also plans to build a knee-deep miniature golf course for non-divers and children too young to be certified.

“There’ll be an underwater shopping mall, too,” Bottoms said. “It’ll be tasteful, though, really spruce up the reef.”