“Politics nearly ruined the island this time,” government watchdog Wade Soote said. “There’s no common ground anymore, no sense of community. And both sides saying they’re only ones with a claim to tradition.

“We hoped a long-standing event like ConchFest would heal some wounds,” Soote said. “Then Jack’s people and ‘Tonio’s people started in on ‘what do you mean by conch’ and what do I mean by conch,’ with neither side budging, and ConchFest was history.”

“We couldn’t even have a meeting without a conch fight breaking out,” ConchFest chair Jay Valve said. “But we had to come up with something. That’s when Clete Horn threw out Albanian mazurka dancing.

“It’s perfect, really,” Valve said. “It speaks to the island’s multi-cultural diversity without being relevant to anyone or anything: it offends no one. No Blacktippers are even vaguely Albanian, none of us has been to Albania, and most of us can’t even spell it.”

To preserve the fragile truce, no conch or conch-related snacks will be sold at any restaurants or food booths.

“Our goal is to avoid any conch-related violence,” Valve said. “The last thing we need is people lobbing conch shells at each other. Or smacking folks in the face with raw conch, like at the last board meeting.”

A last-minute addition is an underwater dance demonstration by island divemasters at Diddley’s Landing public pier at noon..

“The dive staffs felt left out, like our contributions to Blacktip culture were being overlooked,” Eagle Ray Cove divemaster Marina DeLow said. “The cool thing is dancing a mazurka underwater turns it into a slow waltz. It’s breathtaking, really. We tried a Liechtensteiner polka, but the magic just wasn’t there.”

Organizers are cautiously optimistic about the fall festival’s future.

“We’re hoping this will be a new tradition going forward, no matter how the election turns out” Valve said. “Funny thing is, the mayor doesn’t do anything. Or get paid. Before this conch kerfuffle, most people couldn’t tell you who the mayor was.” 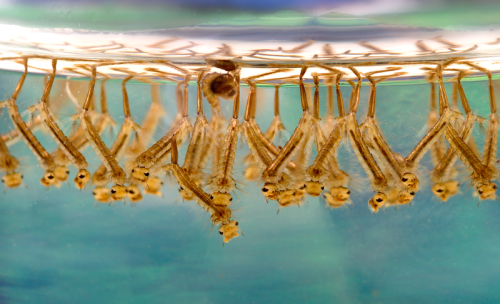 “Blacktip ague pops up every few years, usually mid-July when mosquitoes are thickest,” Public Health Department spokesperson Dr. Alexandrine Poesy said. “We were ready with vaccines for it then, but those meds have a short shelf life. We don’t stock them year round. And some people just refuse to be vaccinated.

“While the ague’s not immediately life threatening, the big concern is this outbreak may weaken islanders’ immune systems and make them more susceptible to influenza,” Poesy said. “That, and its annoying symptoms. This could be a real double whammy for us.”

The disease is believed to have been introduced to the island by European explorers in the mid-1600s.

“DNA research says about four centuries ago a Blacktip Island mosquito bit a Frenchman,” island historian Smithson Altschul said. “Ague victims have been talking in those damn six-beat sentences ever since.

“Any other fever, people stick to normal pentameter, like proper Brits and Americans,” Altschul said. “It’s aggravating. And that doesn’t even address the rhyming nonsense.”

“Our whole dive staff’s got it,” said Eagle Ray Divers operations manager Ger Latner. “Guests laugh at first, hearing a villanelle for a dive briefing and seeing the divemasters in Speedos and red knit caps. But after the first morning, people just want to go diving.

“I mean, today when Lee spouted out, ‘Be gentle with the morays that lurk on this site / They’ll take a pound of flesh if your wetsuit’s too tight’ in that Jacques Cousteau accent, divers were knocking each other down and jumping overboard,” Latner said. ‘It’s creepy.”

“With this fever, the urge is to drink wine, but that just makes it worse,” said Poesy said. “The only effective treatment once the rhyming hits is tequila. Administered externally. Shower in it. Soak in it. Now’s not the time to skimp.”

Many locals, though, have put their trust in home remedies.

“Mama’s whelk-stew enema’s the best for what plagues you,” said island handyman Dermott Bottoms. “Stops all your rhyming and blows out your damn ague.”

A Blacktip Association for Mental Health-sponsored passive aggression and sarcasm retreat this weekend at Blacktip Haven resort has been cancelled due to local indifference, organizers said.

“Passive aggression is the monster on Blacktip Island, gnawing away at the community’s well being,” psychologist and BAMH facilitator Leigh Shore said. “This retreat was supposed to be a lifeline for islanders identify to and properly deal with hostility regulation.

“Now, with everyone boycotting, we’re stuck in the same old snarky mess,” Shore said. “What can I say? You can’t help people who don’t want to be helped.”

Some locals said the lack of turnout was due to confusion about the workshop’s goals.

“”I don’t know why Leigh’s so upset,” Eagle Ray Divers divemaster Alison Diesel said. “The flyer read ‘Passive Aggressive Workshop.’ You couldn’t tell whether it was for or against passive aggression.

“I mean, if she was gonna teach how to get better at it, I was all in,” Diesel said. “But two days of being nice to a roomful of jerks? Whatever.”

“Some yahoo gonna tell us how to live better? Not happening, you know,” local handyman Dermott Bottoms said. “It attacks our culture, our way of life.”

“We Blacktip Islanders don’t suffer from passive aggression. We quite enjoy it,” Cobia said. “It’s not a disorder. It’s a coping mechanism, the survival skill that allows us to get along.

“As for no one going to this seminar-thingy, I’m not losing any sleep over it,” Cobia said.

“I’m not mad,” Shore said. “All it takes is one attendee to make this a success. If the workshop doesn’t go this weekend, we’ll do it next weekend. And the next. We’ll run it every weekend until someone shows up.”

Locals were not swayed.

“No one’s got time for that damn class,” Bottoms said. “And if Leigh tries to make us go, well, she’ll see some active aggression.”

Blacktip Island’s new underwater walking trails offer buoyancy-challenged divers the chance to see some of the Caribbean island’s most iconic underwater sights, such as the grotto at Jawfish Reef. (Photo courtesy of Val Schrader/Marine Parks)

The Tiperon Islands Marine Parks Department has teamed with Blacktip Island’s Skerritt Construction to build a network of underwater trails, aimed at reef conservation, around some of the island’s most popular dive sites. The first trail was officially opened Thursday afternoon.

“The coral on these dive sites is being destroyed by all the divers,” Marine Parks spokesperson Val Schrader said. “They grab coral. They kneel on coral. They stand on coral. They destroy hundreds of years of growth in an instant.

“We were told banning divers was off the table,” Schrader said. “Instead, these trails will give divers a place to stand and kneel and drag their gauges without killing anything. Think of them as pre-killed zones to protect the reef.”

The paths are laid out over sand and across stretches of dead and severely-damaged coral identified by Marine Parks personnel. Trail building was done by Skerritt Construction.

“We use coral-safe marine concrete, stuff that’s been in use since Roman times,” said Skerritt Construction owner Rich Skerritt. “The pointy-heads from Parks mark off where the path should go, and we go to town.

“It’s a Godsend for the island, really,” Skerritt said. “Topside’s about all paved over. We were having to lay people off.”

“I had a lovely dive just this morning,” Blacktip resident Edwin Chub said. “They put in benches so you can sit and ponder a single coral head.

“And when the current picked up, well, there’s also aluminum pegs to pull yourself along, or just hold yourself in place,” Chub said. “They really did think of everything.”

Others were not convinced.

“This sends entirely the wrong message – that it’s OK to touch the reef,” said Harry Picket, president of the Blacktip Island Pelagic Society. “Even on dead coral there’re still polyps trying to reestablish themselves. Most dive guests don’t know dead coral from live coral from their own butts.”

“They’re perfect for Discover Scuba Diving students,” Eagle Ray Divers dive operations manager Ger Latner. “Our instructors can just drag the punters over the paved stretches and not worry so much about buoyancy. It’s good for the reef and divemaster blood pressure.

“We’re also offering hard-hat diving courses,” Latner said. “You can strap on a helmet and lead boots and walk the trails if you want. For an upcharge.”

“We’re building shore entry sites near all the main underwater trails,” Schrader said. “We also have trail maps, and underwater rangers to make sure no one gets lost. Or strays off the trails and into the coral.”