A security camera image of Blacktip Island’s Christmas day thief making off with a bag of stolen holiday items. Residents believe the thief is the island’s legendary mersquatch, an aquatic relative of the more-famous sasquatch.

Blacktip Island residents were shocked Friday morning to find their homes had been robbed during the night. Security camera images show a creature matching the description of the Caribbean island’s legendary mersquatch making off with bags of stolen goods.

Hand-fishing lines, hooks and seaweed strands were left behind in place of the stolen items.

“It was a God-awful sight, and a God-awful smell,” said robbery victim Rocky Shore. “The whole house stinks like someone left a mess of fish in the sun too long.

“Whoever, whatever it was, he cleaned us out,” Shore said. “The kids’ presents, our Christmas dinner, the honk-hoozles, everything. He even stole our Festivus pole.”

Island police are unsure of a motive for the thefts, but were quick to discount reports of a non-human thief.

“Best guess, it’s a prank,” Island Police Constable Rafe Marquette said. “No one would have any need for many of the stolen items, and the thief certainly couldn’t sell any of them.

“Our working theory is the individual captured on camera is someone dressed in a gorilla suit,” Marquette said. “There’s several people on island with the bulk to carry that off, and criminal records as well. Problem is, most of them were passed out across the Last Ballyhoo bar last night. But we’re leaving no drunk unturned.”

Authorities are also interviewing a young girl believed to be the only eyewitness to the crimes.

“Little Shelly Bottoms got up for a sneak peek at the tree and surprised the thing,” Blacktip Island mayor Jack Cobia said. “She said it patted her on the head and gave her a glob of seaweed. If that thing had been violent, though, I shudder to think what might have happened.”

“All the commotion people make during the holidays would be incredibly stressful to a solitary creature like this,” Pilchard said. “Most likely, the items were stolen in an attempt to reduce stressors in its environment. Humans aren’t the only ones who find the holidays taxing.”

Some residents, however, found reason to be thankful for the thefts.

“He was mean to steal my toys, but Santa Squatch took bad stuff away, too,” eight-year-old Shelly Bottoms said. “This year I won’t have to eat nasty candied yams with the marshmallows on top. Or Brussels sprouts.”

A cell phone image of the moment Blacktip Island’s Nativity play violence spilled into the audience at the Our Lady of Blacktip church Thursday night. (Photo courtesy of Barb Schaft)

Blacktip Island’s reef-themed Nativity play at Our Lady of Blacktip cathedral was cut short Thursday evening when an altercation broke out among the play’s participants.

“Lee Helm’s been carrying a flame for Alison Diesel for years,” play director Doris Blenny said. “He was none too happy when we picked her to play Mary, and him to play Second Shepherd.

“Apparently, Lee downed all the Communion wine backstage pre-play,” Blenny said. “Then when Gage Hoase, as Joseph, put his arm around Alison, well, Lee let his emotions get the better of him.”

An onstage scuffle spilled into the audience, sending playgoers scurrying for exits.

“The Angelfish had just started singing ‘Paradise City,’ when a shepherd in a wetsuit jumped across the crib and grabbed Joseph’s throat,” spectator Wendy Beaufort said. “The wise men tried to help Joseph, but the other shepherds had their boy’s back. It’s crazy the damage a bamboo shepherd’s crook can do.

“The fight tumbled off the stage and into us,” Beaufort said. “I t was mayhem. Joseph bashed the shepherd with Baby Jesus right in front of me. People were stomping on each other to get to the doors. I crawled under pews and hopped out a window.”

“Most of the injuries occurred in the stampede to exit the building,” Island Police Constable Rafe Marquette said. “The most serious injuries were sustained by players onstage.

“We have six actors, including Mr. Helm, in custody on multiple charges,” Marquette said. “The most serious charge is assault with a sea fan palm tree. And battery with a mock infant.”

“We’re still trying to finding Baby Jesus, two of the Wise Men’s dogs and any of the shepherd’s land crabs,” Blenny said. “Antonio Fletcher just announced he’s having a holiday crab boil at his place, but I don’t think that’s related.”

“It’s heartbreaking to see this kind of behavior in a church, especially during the holidays,” said the former-Reverend Jerrod Ephesians, head of the Blacktip Island Ecumenical Council. “This was a Nativity play. No one was supposed to take it seriously.

The Lockheed Electra’s broken wings rest upside down in the shallow waters off Blacktip Island’s northeast coast. Aviation experts say the airplane could be that of Amelia Earhart, who disappeared along with the plane in 1937.

“The aircraft looks to have been a Lockheed Model 10 Electra,” said local aviation expert Whitney Pratt. “It was modified with a large fuel tank, and some of its windows were intentionally obscured.

“An Electra with those modifications fits the description of the one flown by Amelia Earhart on her unsuccessful attempt to circumnavigate the globe,” Pratt said. “There’s also the matter of the initials ‘A.E.’ scrawled on the fuselage.

“If it is Earhart’s plane, the big question is how it got here,” Pratt said. “She disappeared over the South Pacific.”

Marine scientists say the soft coral growing on the wreckage deepens the mystery.

“The wings have live carnation coral on them that’s indigenous to the southern Pacific ocean,” Tiperon University-Blacktip biologist Goby Graysby said. “We’re 5,000 miles from where any Dendronephthya should be. I can’t speak to the aircraft details, but yeah, there’s a South Pacific connection somewhere.”

The find has sparked talk of the so-called Blacktip Triangle where hundreds of boats and aircraft are reported to vanish, sometimes reappearing years later.

“All kinds of compass variations out there, you know,” longtime resident Antonio Fletcher said. “Space and time work different in the Triangle. Boats go missing. Lots of scuba divers get lost, too, but that’s something else. Bloody Marys, mostly.

“Plane could’ve crashed somewhere else and been transported here, like those Flight 19 bombers that got zapped to Kathmandu,” Fletcher said. “Happens all the time, you just don’t hear about it.”

Island officials are skeptical of the Blacktip Triangle theory.

“Most of those disappearances are exaggerated, or flat out made up,” Island Police Constable Rafe Marquette said. “Civil Aviation divers are examining the wreckage. If this is Miss Earhart’s airplane, there’s lots of non-supernatural explanations.

“If someone wanted to fake their death and disappear forever, transmitting a false position and then flying halfway around the world’d be a great way to do it,” Marquette said.

“We’re gonna soak visitors in what it was like to be Amelia Bedelia. I mean Earhart,” local entrepreneur Rich Skerritt said. “The centerpiece’ll be a life-sized mockup of that plane linked to a flight simulator so folks can have a feel what flying it was like. We’ll have shirts and caps and coffee mugs for sale, too.

“Our goal’s to make Blacktip Island the hottest destination in the Caribbean. Or the South Pacific,” Skerritt said. “You got to have a dream. If you don’t have a dream, how you gonna make a dream come true?” 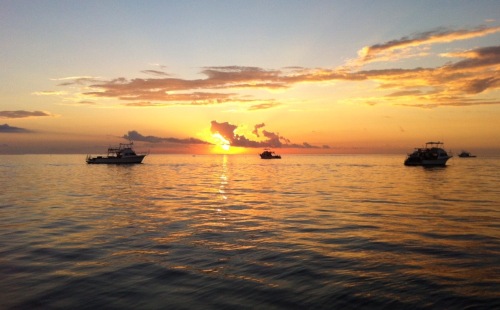 Divemasters working on Blacktip Island’s dive boats will soon be able to earn their Doctorate of Scuba Diving at Tiperon University’s Blacktip campus.

Tiperon University-Blacktip officials announced Thursday the school will offer advanced degrees in divemastering when the winter semester begins next month.

Dubbed the ‘Ph. Dude’ by local dive professionals, the program will place less emphasis on pedagogy and more on scuba research, its creators said.

“Every divemaster has been trained to teach,” TU-B professor Ernesto Mojarra said. “Our studies will focus on the more cerebral aspects of divemastering that are too often overlooked. We’ll question why we dive and why that matters, with a goal of addressing the existential angst in the heart of every scuba diver.

“This being a scuba-based degree, doctoral dissertations will be written on underwater slates,” Mojarra said. “Oral exams and thesis defenses will be done underwater via an expanded series of hand signals we developed to convey the requisite nuances of thought.”

“Diving’s seeing that radical credential creep like everywhere else,” said Club Scuba Doo dive operations manager Finn Kiick. “Used to, you could blast through a DM course and jump on a boat. Now there’s wannabes with diplomas, even bachelor’s degrees.

“You don’t need the doctorate to do the job,” Kiick said. “But you totally need it to land the job.”

Industry analysts, however, aren’t as upbeat.

“It’s a status thing,” said Lou Luxfer president of the Dive Industry Coral Keepers. “Ops managers like to beat their chests about how highly trained their staffs are. They overlook whether customers are getting better supervision because of these advanced degrees.”

“The research and the dissertation require years of work,” Helm said. “With the uni collecting tuition and fees the whole time. There’s no way to pay off that sort of debt on a divemaster’s wages.”

TU-B’s Mojarra brushed those criticisms aside.

“Most of our candidates aim to work in academia,” Mojarra said. “Expensive? Sure. But what better way to break free of the dive bum lifestyle that traps so many people for decades? You divemaster for more than five years, people start looking at you funny. As well they should.”

NAUI, SSI and IANTD have approved the program for their dive leaders. PADI does not yet recognize the program’s accreditation, though the agency is working on a PADI-specific divemastering doctorate of its own.