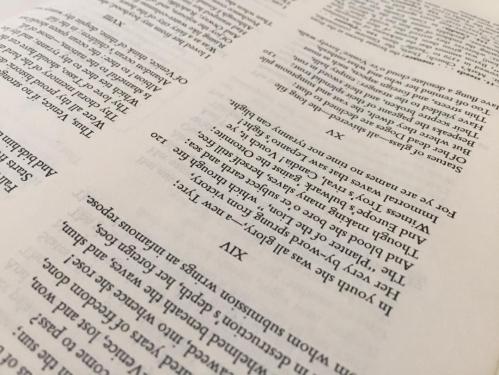 Blacktip Island Friends of the Library this week are making their annual literary festival an island-wide event via loudspeakers after social-distancing rules made it impossible to have the event at the Caribbean island’s Heritage House.

“We can’t have gatherings of more than 10 people, so that put the kibosh on any public readings,” BIFL president Doris Blenny said. “We tried having presenters just yell really loud, but that just caused more problems. Lee Helm couldn’t get through his limericks without his voice giving out.

“We were set to cancel the event altogether, then Rocky Shore came up with the idea of putting up loudspeakers so everyone on the island could hear,” Blenny said. “We’ve had amplified readings every night this week, and it’s worked out quite well.”

BIFL members say the readings strike a balance between art and public engagement.

“We thought about streaming it online, but no one wants to watch someone just standing there reading something,” Shore said. “The speakers we set up have most of the island covered so everyone can hear while they do other things.

“In a way, this is better than the traditional lit fest,” he said. “You don’t get the social aspect of it, but more people get to hear the readings. Once we come out of lockdown, I think we’ll find it brought the island closer.”

“I never realized what kind of talent we had on the island,” Wendy Beaufort said. “I’ve heard everything from poetry to short stories to essays to one-act plays the past few evenings.

“Wednesday’s poetry slam was especially good,” Beaufort said. “And last night Antonio Fletcher played all four parts in his play, talking in completely different voices for each character. He does that most nights at the bar, though, too, so it’s not as big of a deal as it seems.”

Others were not happy with the festival’s new format.

“Don’t want to hear all that crap blaring out at me every night,” James Conlee said. “I want to hear ‘Tonio babbling on, I’ll go to the Ballyhoo. Before, it was easy enough to avoid this nonsense by just staying away from the Heritage House. Now, they’re forcing it on us whether we want it or not. Doris and them need to give it a rest.

“Literature’s fine, but it’s something you should do in the privacy of your own home,” Conlee said. “And wash your hands afterward. This goes on another night, I’ve got a pair of wire cutters I’m gonna put to good use on them speaker wires. I know my rights.”