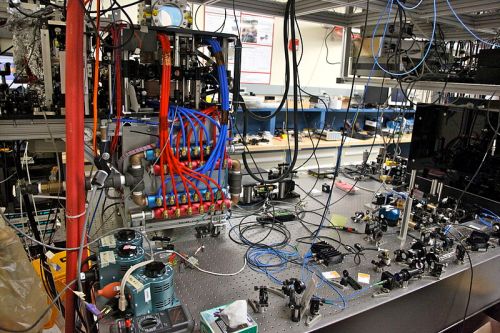 Researchers with the Caribbean Anti-Newtonian Society’s Blacktip Island laboratory used a Bose-Einstein condensate – a cloud of super-cooled Rubidium atoms in a laser trap (pictured) – to reach their conclusion that gravity does not exist on the small Caribbean island. (photo courtesy of Steve Jurvetson)

Researchers from the Blacktip Island chapter of the Caribbean Anti-Newtonian Society on Thursday released the results of a study showing gravity does not exist on the small island.

“Isaac Newton was a first-rate huckster who convinced people there was gravity so he could sell them science books,” CANS spokesman Harry ‘Scratcher’ Wrasse said. “Then the church and the Rosicrucians piled on. If there’s a force so strong it can hold down all the people and buildings and oceans, why can birds, smoke and helium balloons escape it? It’s fake science.

“Our tests show a lack of so-called gravity on Blacktip,” Wrasse said. “And we’ll be replicating our tests on other islands soon, to see if it’s a localized thing or something global.”

“I can’t believe I’m actually having to say this, but there are centuries of proof that gravitational forces exists,” said Tiperon University-Blacktip physics chair Olive Beaugregory. “Gravity went from ‘theory’ to ‘law’ a long time ago.

“It’s interesting that Harry and his colleagues don’t offer any alternative explanation for one of the fundamental forces of physics,” Beaugregory said.

Wrasse was quick to defend the CANS findings.

“We’re not sure what exactly keeps things stuck to the island just yet,” he said. “That’s another study. And it in no way invalidates this one.”

A TU-B press conference explaining Newtonian gravitational theory and general relativity, scheduled for Thursday evening, was cancelled due to protestors outside the island’s Heritage House.

“They had fire in their eyes and were waving torches and rum bottles,” Beaugregory said. “We’ll try again when things cool off and people are sober. Or as sober as they’re going to get. Maybe a 10 a.m. talk.”

Many of the protestors defended the report.

“It does answer a lot of questions,” Theosophy League president Antonio Fletcher said. “If something’s strong enough to stick me to the Earth, how come I can still raise my arms? String theory explains it, you know. Invisible strings hold everything in place.”

Others protestors focused their ire on university scientists.

Others locals saw the CANS report as validation of existing theories.

“This is more proof the Earth’s flat,” bartender Kenny Chromis said. “We’re on a giant plate flying up through space. The acceleration keeps us stuck to the surface.”

Others scoffed at that explanation.

“Everyone knows the Earth’s balanced on the back of a giant turtle,” Catalina Luxfer said. “It’s the turtle’s motion that keeps us on the ground. Duh.”