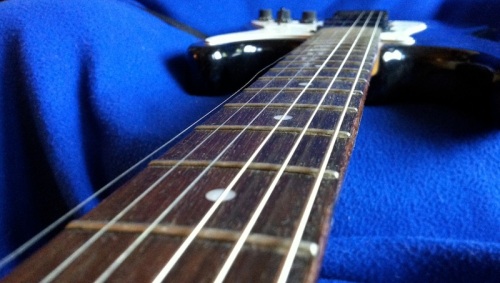 Eagle Ray Cove scuba resort will celebrate the end of summer with Blacktip Island’s 9th annual Battle of the Bands this weekend. The three-day music festival will showcase the island’s top musicians, with the winner earning a contract with Island Records.

“This year’s acts are as diverse as the island’s population,” festival organizer Jay Valve said. “From traditional island country-western to death metal, there’ll be something for everyone.”

The lineup of bands includes:

“We built a stage out over the water,” Eagle Ray Cove manager Mickey Smarr said. “It’ll limit access to the musicians and cut down on folks rushing the stage, like spoiled the last few Battles.

“There’ll be a few drunks who try, sure, but they’ll have to swim. And we’ve been chumming the water to draw in the sharks. It’s way cheaper than hiring security.”

The festival will kick off with local favorite Young Jacques and the Double Hose performing Black Sabbath covers on steel drums.

“We do lounge-punk,” Effing Zeagle guitarist Casey Piper said. “Think Green Day does Sinatra – ‘I’ve got you under my skin,’ if you take my meaning. And I think you do.”

A newcomer to this year’s competition, Red Über Red will play German techno on dog whistles.

“You can’t really hear anything, but, man damn, does it get people dancing,” said pennywhistler Marina DeLow. “And when we play our recordings underwater for divers, it morphs into ‘Eine kleine Nachtmusik.’”

The festival will also feature traditional quadrille dancing and cloggers between musical acts.

“We’ve gone out of our way to make the festival family friendly,” Valve said. “We’re even have non-alcoholic beer for the kids.”

Proceeds from the concert go to the Blacktip Island Institute of Noetic Sciences.