Scuba diver “minnows” Gage Hoase (left) and Ginger Bass race for the safety of a nearby coral head Thursday afternoon during a game of “sharks and minnows.” (photo courtesy of Diego Delso)

Blacktip Island’s scuba-diving residents, deprived of tourists and other island visitors since March, this week created an underwater sharks-and-minnows league to add variety to their diving activities.

“We’re all doing lots of recreational diving these days to stave off boredom, but diving the same sites was getting pretty stale,” Gage Hoase said. “For a laugh one day, Jerrod tried to keep Joey Pompano from getting to the boat’s boarding ladder. Other people laughed and joined in and it turned into an impromptu keep-away game.

“Next day, everybody started playing tag underwater, so we formalized some rules and voila, we had a thing,” Hoase said. “It’s the same rules as above water, or in a pool. Mostly. Divers try to get from one coral head to the next, with the ‘shark’ in between. When the shark bangs his tank it’s ‘shark attack’ time, and the minnows have to get past him without getting tagged.”

Players say the action can get intense.

“It gets damned competitive down there,” Ginger Bass said. “People you’d never suspect of being gamers get super aggressive. And there’s always arguments about whether somebody was actually tagged. It’s hard to tell, sometimes, when you’re wearing a wetsuit. A couple of times we had to end the game so people could go to the surface and argue over who did, or didn’t get tagged.”

Some on the small Caribbean island raised safety concerns.

“These people are grabbing and clawing at one another 30 feet underwater. Eventually someone’ll get hurt,” island nurse Marissa Graysby said. “Somebody accidentally snags a regulator hose or bumps someone’s tank valve while they’re playing grab-ass, that could mean serious trouble.

“The only medical infrastructure on this little island are me and the clinic, and we have no way to evacuate anyone off island, Grasby said. “Blacktip is not the place you want to get hurt. Especially now, and for such a silly reason.”

Others said the nurse’s fears were unfounded.

“People get into the game, sure, but we’re all careful not to be stupid,” Jay Valve said. “If a reg comes out, all action stops until the diver gets it back. And we do air checks between each round.

“The real medical issue is what would happen if we all didn’t play this game,” Valve said. “it’s social interaction that doesn’t involve drinking, and folks blow off a ton of steam with this.  Marissa’s not trained to deal with the mental health issues if we all sat around doing nothing. Or diving the same old sites the same old way.” 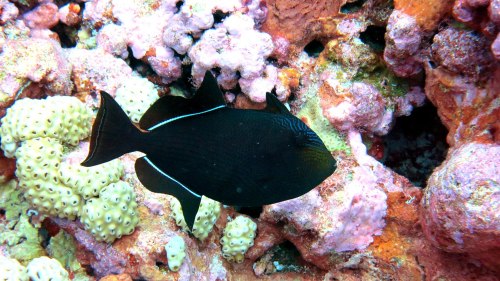 The common black durgon is a major danger in the new Durgons and Dragons role-playing game developed by a group of Blacktip Island scuba-diving gaming aficionados. (photo courtesy of NOAA)

A group of Blacktip Island underwater role-playing game enthusiasts this week played their first rounds of their newly-developed Durgons and Dragons on Jawfish Reef to celebrate the upcoming end of hurricane. season.

“There’s no magic per se, but the in-game reef is way different than the real reef,” Helm said. “Sharks and orcas and krakens are the obvious dangers. But all the normal reef fish can be deadly, too.”

As in Dungeons and Dragons, players must navigate dangers and defeat monsters.

“Parrotfish, triggerfish, nurse sharks, even other divers can kill you,” gamer Edwin Chub said. “And you have to watch for swarms of brown chomises. Chromii. Whatever.

“The real terrors, though, are the leafy sea dragons and black durgons,” Chub said. “Just yesterday a durgon chewed through 10 player characters. We’re still recovering from that.”

With players on scuba, game time is limited by air consumption.

“When you’re out of air, the game’s over. Heavy breathers put the entire team at risk,” said player Harry Blenny. “You’re basically playing against game hazards, other players and time. People meditate beforehand to save air.

“It gets vicious. Light breathers try to kill off the air hogs’ characters so the game will last longer,” Blenny said. “And the air-suckers gang up on other players to get those characters killed off. We had plans for surface-supplied air to avoid all that, but decompression sickness issues scotched that since there’s no barometric chamber on the island.”

“I really don’t get it, but I guess I don’t have to,” cook Jessie Catahoula said. “It’s goofy, but at least it keeps Lee and his buddies out of sight and away from me.”

“It teaches people to work together as a team, not knowing if one of the characters is a Random Bad Diver,” Helm said. “When an RBD starts flailing there’s a 20 percent chance the character closest to him drowns.

“Just this morning my 39th-level heliox diver got bent on a rogue upwelling because of a Baddie,” Helm said. “I had to start over with a character that’s barely nitrox certified.”

Others touted the game’s growing popularity.

“There’s already Durgons and Dragons clubs on other islands,” Blenny said. “We’re gonnna have a D and D tournament over the holidays, too. As word spreads, our ultimate goal is to have some women join us. Or talk to us.”