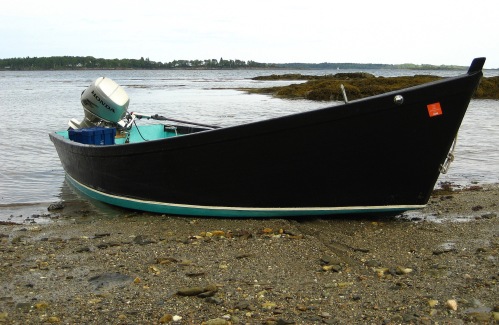 The new Dryft scuba diving rideshare service will allow Blacktip Island shore divers to hail rides to and from the Caribbean island’s dive sites with a computer app. (photo courtesy of Bradley Grillo)

A ridesharing dive boat service, based loosely on the popular Uber and Lyft rideshare programs, launched this week on Blacktip Island to take shore divers to many of the Caribbean island’s dive sites.

“Shore diving can be tough, especially in winter with the heavy seas,” app developer Goldie Goby said. “With Dryft, divers can hail a fishing boat, get picked up at a sheltered spot, and be dropped anywhere around the island. Then at the end of the dive, they surface, hail a ride back and Bob’s your uncle.

“Like with land-based rideshares, you pay according to how far you want to go, and you can rate your captain and tip them,” Goby said. “It lets divers set their own schedule, and local fishermen can make a little money on the side.”

“It’s great going out when weather makes shore diving impossible, and going to sites you can’t get to from shore,” Harry Blenny said. “But getting back out can be an adventure, depending on how rough the seas are, how long you have to wait and what kind of boat picks you up.

“Trying to get back in a skiff this morning in eight-foot seas was an adventure,” Blenny said. “I passed up my gear and it still took four tries, with Clete Horn finally hauling me up by my wetsuit. I’m still walking funny.”

Local fishermen were divided on the service as well.

“Easy money, taking yahoos out on the sea and chucking them overboard,” James Conlee said. “Getting them back in can be rough, but it’s them who get banged up, not me.”

“Divers in the water scare off the fish,” Antonio Fletcher said. “Need fewer divers out there, not more. Plus, divers bobbing at the surface can be hard to see. Don’t want my prop getting dinged up on one of their scuba tanks.”

“If a buddy team gets dropped off late in the day and there’s no boats nearby when they surface, they might never be found,” Island Police Constable Rafe Marquette said. “If they’re off the south end, in a current, the next stop’s Venezuela. Or a shark’s belly.”

“Divers don’t scare off fish, and ‘Tonio shouldn’t be fishing in the marine park anyway,” Goby said. “And if he can’t see a diver on the surface, he should be driving a skiff.

“Also, we guarantee any diver Dryft drops off will have a ride back,” Goby said. “We ran test dives for months before the official launch, and we never had a single diver complain. We learned our lesson after we lost the first few.”