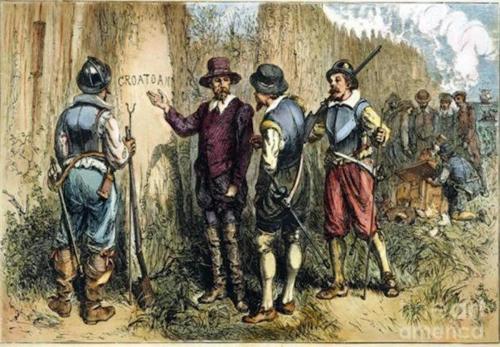 An artist’s rendition of the relief expedition reaching the abandoned ‘lost colony’ on Roanoke Island, N.C. in 1590. A recently-discovered scroll indicates the colonists relocated to Blacktip Island in the late 1580s. (illustration by Smithson Altschul)

A newly-discovered iguana-hide scroll, found while excavating the crypt of Blacktip Island’s original church, claims the tropical island’s original settlers were the remnants of the Lost Colony of Roanoke Island in North Carolina, which disappeared in 1590, island historians said Thursday.

“It’s one of the biggest mysteries in North American history,” Blacktip Island resident historian Smithson Altschul said. “John White founded the colony with 115 people, went back to England for supplies, and when he got back, the colony had vanished, including little Virginia Dare, the first English child born in North America.

“The only clue was ‘Croatoan’ scratched on a fence post,” Altschul said. “Leading theories are the colonists were killed by hostile natives, Spaniards or disease, but now we know the truth. This hide proves they came here. The scroll says food ran short and enemies were closing in, so they set sail in what boats they had. A hurricane blew them here. And most people don’t know it, but ‘Croatoan’ is actually the Middle English word for ‘Blacktip.’”

Many locals were not surprised by the discovery.

“Old timers always talked about their ancestors being English castaways way back when,” Antonio Fletcher said. “Most Blacktippers, we got that look about us. And there’s all the people on this island named Virginia. And Dare. And you think it’s coincidence the Ballyhoo’s run by ol’ Croatoan Bottoms?

“Found old pottery, too, around that crypt,” Fletcher said. “That seals the deal. No evidence up in North Carolina, ‘cause we got it all here, where they came to be safe from indians and Spaniards. Never took up with friendly natives on Hatteras. Settled here with friendly Blacktippers instead.”

Others questioned the findings.

“The only indication of the Roanoke settlers migrating to Blacktip is a single scroll of questionable provenance,” Tiperon Univesity-Blacktip archeology professor Lucille Ray said. “It’s on an old hide, yes, but the writing is in 20th-Century cursive. And the pottery looks more like broken flower pots. It’s an interesting story, but there’s no actual proof.

“It’s also a convenient coincidence that Smithson’s in the middle of raising money for museum improvements right now,” Ray said. “An announcement like this is exciting, sure, and it’ll also open a lot of wallets.”

“I’m a serious historian and would never perpetuate a hoax. Not like this,” he said. “This is the find of a lifetime. Lucille’s just jealous and trying to piss on my charcoal. This discovery is a proud day for all of Blacktip. We should be celebrating it together, not picking at each other.”

The manuscript will be on display at the Blacktip Island Heritage Museum for the next month, and available for public viewing for an addition $5 fee. ‘Croatoan’ mugs, caps and t-shirts will be available in the museum gift shop.