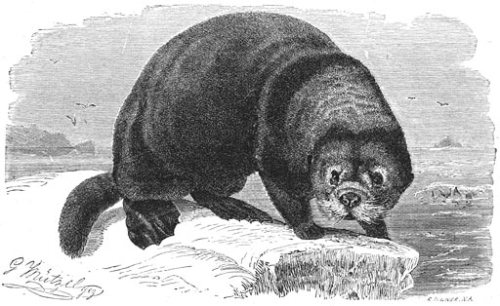 An illustration from the first of local author Corrie Anders’ ‘Larry Otter’ series of young adult novels, now subject of a lawsuit claiming copyright infringement. (illustration by A. E. Brehm)

A Blacktip Island author Wednesday was ordered to pay $1 million and stop all sales of her popular ‘Larry Otter’ fantasy novels for young adults due to alleged copyright infringement.

“They’re bagging on it for being a Harry Potter rip off, but it’s totally different,” author Corrie Anders said. “Larry’s a young, orphaned sea otter trying to fit in with a school of fish on Snogmorts Reef, not some sorcerer-in-training.

“Sure, Larry has a zig-zag scar on his rear flipper, but it’s from a shark attack. That’s where the similarity ends,” Anders said. “And the only magic is in the hearts of my readers.”

“We’re fighting this nonsense tooth and nail,” said Anders’ attorney Bob Skulkin. “There’s also a cease-and-desist order on any in-progress novels. We’ve filed a counter-suit to shut that crap down.

“And $1 million? Good luck with that,” Skulkin said. “Corrie’s day job’s bartending. They’re asking for blood from a stone.”

Local ‘Larry’ fans were shocked by the news.

“The kids love Larry’s adventures,” Sally Port said. “We read a chapter before bed every night. Our youngest got the reading bug with the series.

“I don’t see what some big publishing house has to gain, taking these stories away from little children,” Port added.

Others echoed that sentiment.

“These books are a much more positive influence than those horrible Harry Potter books,” Christa Goby said. “Larry’s adventures have the kiddos out learning to swim and hunting sea urchins. Harry had them waving sticks at each other and believing in witches and magic spells and I don’t know what all.”

“Until someone physically takes away my laptop, I’ll keep telling Larry’s story,” she said. “My readers believe in me, and that’s all that matters. ‘Larry Otter and the Order of the Lionfish’ll be out by Christmas.”