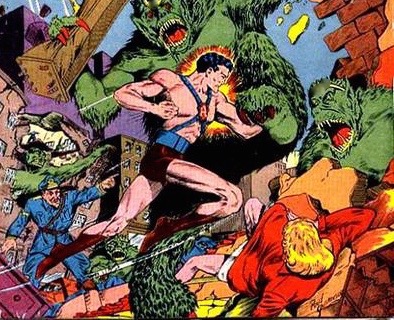 Backstabb battles Dr. Speedo’s evil Pee Men in the premier issue of The Adventures of The Slacker Defenders. (courtesy of Paul Gustavson)

Kiick said the The Adventures of The Slacker Defenders’ heroes and villains are modeled on people he has known in his years on Blacktip Island.

“This’s a new breed of superheroes – pure Blacktip personalities,” Kiick said. “In most comics, a dude get mutated by some scientific snafu, right? Well, the Slacker Defenders’ve been torqued by living on a little island too long.

“This place’ll do that,” Kiick said. “Island life takes who you are and jacks it up, for good or evil.’

“The Mooch can finagle anything from anyone,” Kiick said. “Scuttlebutt, she’s a mind reader and the team’s intel wizard. STD’s the femme fatale who can give bad guys the clap from across the room.”

The first issue pits the team against its nemesis, the evil Dr. Speedo and his Pee Men.

“The Pee Men, meanwhile, look like ordinary scuba guests. They congregate at bars and destroy evenings with deadly-boring dive stories,” Fairlead said. “In the inaugural issue they’re tasked with chasing off all the tourists so Dr. Speedo can drill for oil offshore.”

Some readers have taken offense with Dr. Speedo, a pot-bellied villain who wears only the skimpiest of swimming attire.

“I was shocked to find my young son with a comic showing a pasty fat man wearing nothing but a red banana hammock,” island visitor Philomena Porgy said. “Children don’t need to see that. And it bore an uncanny resemblance to the boy’s father.”

Others locals objected to what they see as the comic’s subversive subtext.

“This Dr. Speedo’s set up as the bad guy for wanting to replace a weak revenue stream with a stronger one,” Eagle Ray Cove resort owner Rich Skerritt said. “That’s anti-progress. It gets folks riled at local businesses. We can’t have that.

“I talked to Nelson Pilchard down at Scuba Doo about terminating Finn,” Skerritt said. “And to Jack Wrasse at Immigration about having him deported.”

Kiick is unfazed by the criticism.

“The next issue’s gonna have the Pee Men snagging all the grouper from the reef so Dr. Speedo can open a sandwich stand,” Kiick said. “Then the Slacker Defenders’ll swing into action in a big-ass way.”