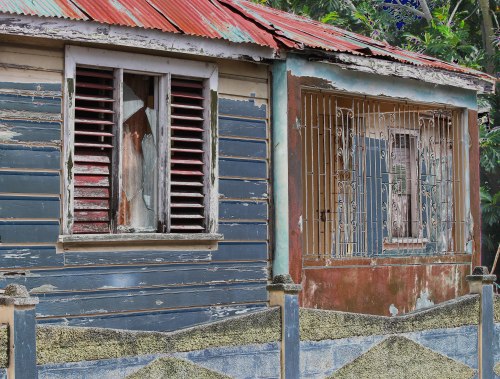 The back porch of Dermott Bottoms’ shack will be the set of the ‘Cookin’ With Dermott’ cooking show, which aired its first episode this week. (photo courtesy of Rennett Stowe)

“Lots of good food here nobody off island knows about,” Bottoms said. “Tourists’re surprised by all the food we got, ask how to make it. Now, I’m gonna show ‘em, right here on my back porch.

“Took my mama’s recipes and modernized ‘em,” he said. “Also gonna show folks practical stuff like how to slice vegetables with a machete, how to knock out a smoke alarm before they start cookin’ and how to grill roadkill iguana on a car engine—the meat’s already been tenderized.”

The show’s backers say it has unlimited potential.

“Dermott’s going to be the next Julia Child,” local attorney Ferris Skerritt said. “Certainly, he’ll cover beer-can chicken and conch-and-Cheeto pizza, but he’ll also address when it’s better to just open a can of beanie weenies, and which beer pairs best with what dish.

“It’s just on YouTube for now, but we’re working on a deal with the Food Network,” Skerritt said. “This regional-and-unique is the latest rage in food TV. We just need to get more than three followers to get their attention.”

Some on the island questioned the show’s viability.

“The first episode was Dermott showing how to make turtle-egg omelets, including where to find turtle nests and how to dig them up,” Marine Parks spokesperson Val Schrader said. “That may be an old-school local tradition, but it’s massively illegal. His demonstrations of how to open a coconut and skin a turbot were rough, but educational. His killing and eating endangered species is beyond the pale.”

“This is Dermott we’re talking about here,” Rocky Shore said. “On camera, playing with knives and fire. That won’t end well. And as for the dishes, frankly, if Dermott shows how to cook something, I’m gonna do the opposite. The man could burn water.”

Bottoms and Skerritt took the criticism in stride.

“Dermott’s rough delivery is part of the charm,” Skerritt said. “Is he difficult to understand sometimes? Sure. Does he wave that machete around like he has no self-control? Absolutely. That creates the narrative and builds tension—what, exactly, is he cooking, and will he finish the show without injuring himself or destroying the set? We’re pitching it as ‘Sasquatch meets Rachel Ray.’”

Bottoms brushed aside the negative remarks.

“Folks saying I can’t do this, I’ll show ‘em,” he said. “Gonna be famous on more than just one island.”