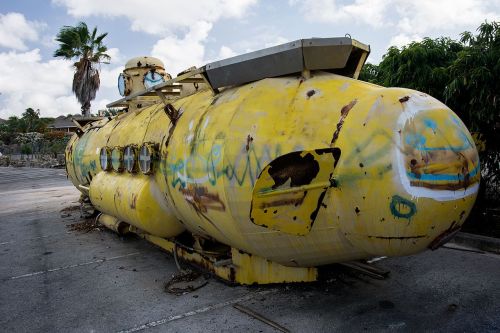 A new high-speed sightseeing submarine took its maiden tour around Blacktip Island Thursday morning to launch what backers hope is as an emerging tourism market.

The submarine circles the island on a magnetic levitation rail at a depth of 25 feet, carries up to 32 passengers and can complete the island’s 26-mile circumference in less than an hour.

“Lots of places have submarine rides, but Blacktip’s the only one with a bullet sub,” Eagle Ray Cove owner Rich Skerritt said. “All us resort owners ponied up, and the Tourism Department kicked in some cash, too, to get more guests to visit the island.

“Lots of people don’t dive. They just want a quick look at the reefs, then back to the bar,” Skerritt said. “Hell, half our divers cover two, three sites every dive anyway. And no one gets seasick on the sub. So far.”

“The carriage does 37.3 miles per hour, top speed,” said Tiperon University-Blacktip engineering chairperson Sally Port. “The drag from the water keeps the velocity down, and that’s key. If it went 200 miles per hour underwater, all you’d see would be a blue blur.”

The submarine is not without its critics.

“They’ve turned a pristine reef into an amusement park,” Pelagic Society president Edwin Chub said. “And no environmental impact study was done. They just pounded a rail into the reef and let her rip.

“And ‘bullet sub’ is a fitting name. It goes so fast fish can’t get out of its way,” Chubb said. “Snapper and coral die for this every day. There’s ichor on Rich and Sandy’s hands.”

Business owners brushed aside the criticism.

“There’s been bullet trains in Japan and Korea for years, so why not have one underwater on Blacktip?” Sandy Bottoms’ Beach Resort owner Sandy Bottoms said. “We’re just keeping up with the times. Showing fish to people who wouldn’t otherwise see them, and without a long boat ride.

“Guests say it’s better than diving,” Bottoms said. “The sub slows down at good sites where there’s stuff to see, then zips past the boring junk,” Bottoms said. “We can cycle through 30-plus tourists an hour, then sell them seaweed-dyed Bullet Sub t-shirts when they get off. This is the future of ecotourism.”

“It was like being in a video game, zooming over the coral like that,” said Sandy Bottoms’ guest Paula Porgy. “We scared the crap out of a bunch of fish, and I think we bonked into a couple of divers, but what a ride!

“It was the trip of a lifetime! We saw everything!” Porgy said. “And we were back in the hot tub in time for pre-lunch margaritas. Who could ask for more?”