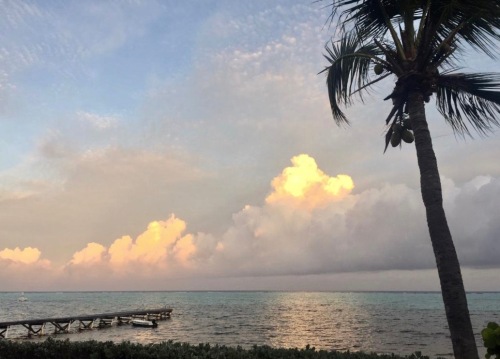 “The bar scene’s damned competitive on this island, and we’re trying to get ahead of the curve,” Sandy Bottoms’ Beach Resort owner Sandy Bottoms said. “It’ll be the only place in the Caribbean you can dive down, sit in a Plexiglas dome and have a drink. It’ll have little electric servo motors, too, so it can cruise around the reef.

“For safety, we’ll only serve freedivers, not anyone on scuba,” Bottoms said. “And it’ll only be in about six, eight feet of water, so decompression sickness won’t be a factor. It’s only a prototype so far, but we’ve been encouraged. I don’t know what all the fuss’s about.”

“Sandy’s talking about serving people alcohol at depth, then having them leave the bar underwater and swim back to the surface inebriated,” Sally Port said. “One inhalation, or hiccup, at the wrong time, a bar patron drowns.

“And if you stay down there for multiple drinks, maybe make an afternoon of it, DCS will definitely come into play. People’ll get hurt,” Port said. “He’s chasing a dollar today that’ll cost him multiple dollars tomorrow. That’s a black eye for Blacktip.”

Others questioned the structure itself.

“There’s no way they can build a plastic bar sturdy enough to withstand pressure at depth and a bunch of drunks banging around in it,” Harry Blenny said. “Dermott spends one evening there and the place’ll be demolished.

“Sandy got the idea from him and his buddies taking beers down in wreck wreck and drinking them in an air pocket,” Blenny said said. “There’s a world of difference between a steel hull and a plastic bubble. And how much coral will it destroy into while it’s scooting around the reefs?”

Not all residents opposed the concept.

“It would be lovely to slip down, have a glass of wine and watch the fish go by,” Paloma Fairlead said. “And sunsets would be incredible. You’d just have to drink responsibly.

“And Sandy, or someone, would have no problem coming up with a shuttle of some sort to get people down and back without the danger of drowning,” Fairlead said. “I’ve seen that sort of thing in movies.”

Others said they would avoid the bar.

“Don’t have to worry about me trashing it because there’s no way I’ll go down there,” Dermott Bottoms said. “I’ll go on the sea to fish, but won’t go in it, much less under it. There’s sharks and such. And plenty of rum right here where it’s dry.”