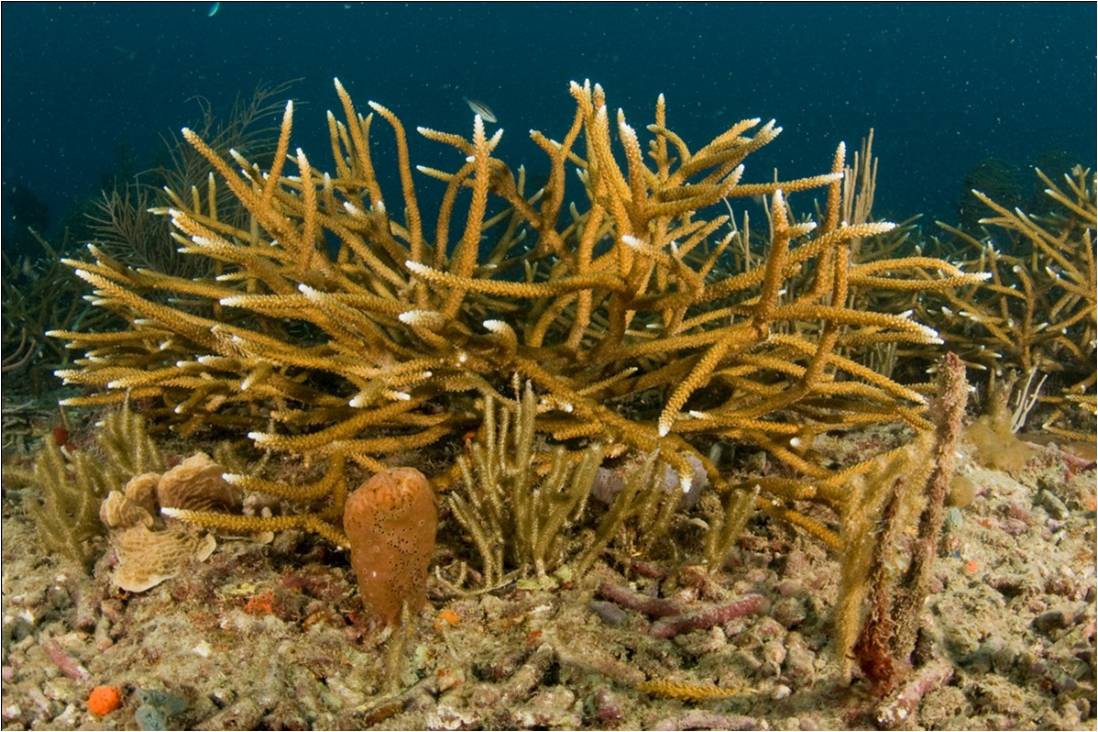 The colony of Blacktip Island walking staghorn coral, found this week by island divemasters, is the only-known specimen of the once-believed-extinct species. (photo courtesy of Gage Hoase)

A rare subspecies of staghorn coral, native solely to Blacktip Island and thought extinct for more than 30 years, was rediscovered by members of an island resort’s dive staff, island marine biologists said.

“We went to show our divers one of the only stands of staghorn on the island, and it wasn’t there,” Eagle Ray Divers divemaster Gage Hoase said. “We thought some yahoo’d torn it up for a souvenir, then we spotted it—the exact, same, tangle of coral—50 feet away, about 15 feet deeper, by the drop off.

“We’d heard stories of Blacktip Island walking coral, but passed them off as a local myth,” Hoase said. “But this coral head uprooted itself, then re-rooted in a completely different place. That’s the only explanation. There was no drugs or booze in us at all.”

“Walking staghorn used to be all over the place here, before climate change and ocean acidification and human refuse took its toll,” island historian Smithson Atschul said. “The last known sighting was back in the early 90s. We thought it was extinct. But now, this is exciting news.

“Firstly, it tells us the environment’s healthier than we thought, if walking coral can re-establish itself,” Altschul said. “Since it moved to deeper water, that also tells us the water quality, or temperature or both are more conducive to growth at that depth. Divers’ll be looking for more coral there along the wall’s edge.”

“Blacktip walking staghorn was, is, a migratory sub-species,” marine cryptobiology professor Ginger Bass said. “They can perambulate, like sea anemones, but are harder. We’ve long suspected there were colonies down deep over the wall—this is one of the most resilient corals in the world, and would never be killed off so easily.

“If you study those long, thin arms, you can see they’re made for gripping sand and substrate,” Bass said. “The corals were obviously threatened in the shallows and moved to safer waters. With this resurgence, our goal now is to install underwater video cameras all over the wall to record the migration.”

The island’s business community is promoting the coral.

“A one-of-a-kind thing like this, it’ll put us on the diving map,” the island’s Chamber of Commerce president Piers ‘Doc’ Plank said. “There’s gonna be people from all over coming to see it and film it and study it. That means lots of business for dive companies, hotels and restaurants. Well, restaurant, singular, since that’s all we have.

“We’re gonna put a fence around this bit we know about so it doesn’t wander too far away,” Plank said. “Eagle Ray Divers is also offering rebreather courses so people can go sit in the sand for hours and wait for the coral to move.”

Eagle Ray Divers is not disclosing the coral head’s location until it can be safeguarded.