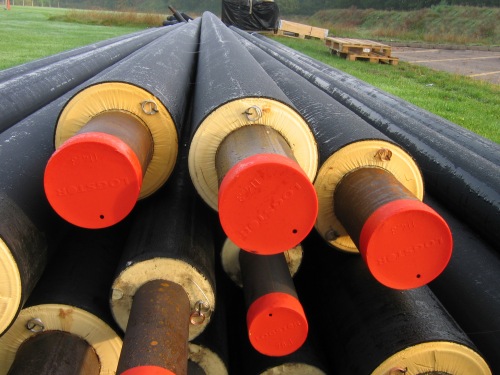 Sections of insulated pipe, with leak surveillance monitors, at Blacktip island’s Bonefish Brew prior to being buried as part of the company’s new Brewstream delivery system. (photo courtesy of Mike 1024)

Hostilities between Blacktip Island’s two competing breweries came to a head this week with the completion of Bonefish Brew’s ‘Brewstream’ pipeline, which will deliver draft beer directly to the small Caribbean island’s bars, company a spokesperson said.

“Those pirates over at Assmonkey Ale kept whacking our delivery van, then delivering their nasty-ass beer in its place,” Bonefish Brew president Adolph Süds said. “We tried everything to shut that down, with no success. Then we got the idea of a pipeline pumping beer directly to bars without the need for a van.

“Took us a while, since we had to bury it to head off Assmonkey saboteurs, but it’s in place now and going like gangbusters,” Süds said. “The hidden plus is the beer tastes fresher since it’s been aerated nicely and chilled with our insulated pipes. Customers love it.”

The rival brewer condemned the pipeline.

“They’re taking our livelihood, snatching food from our kids’ mouths,” Assmonkey Ale CEO Adolphus Mandrill said. “They can’t keep their van running, that’s not our fault, but it does speak to the quality control over there. And there’s no proof our people chucked those nails on the road. That’s straight-up defamation.

“Building a pipeline deprives folks to opportunity to enjoy our higher-quality products,” Mandrill said. “Plus, the lines going to Sandy Bottoms and the Sand Spit run awfully close to the booby pond. They already had one leak there. Sure, it improved the pond’s smell, but what happens when . . . pond water . . . gets carbureted into the flow? They’re gonna kill us all to make a buck.”

“This beer battle’s been a pain in everybody’s butts,” Island Police Constable Rafe Marquette said. “Those roofing nails took out the tires on more vehicles than just a delivery van. Happens again, people’re going to jail. Once my tires get replaced.

“Bigger problem with the feud is bars run out of beer,” Marquette said. “That’s a major public safety emergency on this island. No beer in the bars, folks’ll riot. They tore up Eagle Ray Cove’s tiki bar just last week. I don’t care who wins, this crap just needs to stop. If a pipeline does that, I’m all for it and can finally get some sleep.”

Island residents were pleased with the news.

“I don’t know, or care, who flung the nails,” island de facto mayor Jack Cobia said. “For all I know, it was a Bonefish Brew false flag to make Assmonkey look bad. My office fully supports anything that puts an end to the nastiness. If Assmonkey has to die, well, it’s for the greater good.”

Cobia would neither confirm nor deny reports he has significant investments in Bonefish Brew.