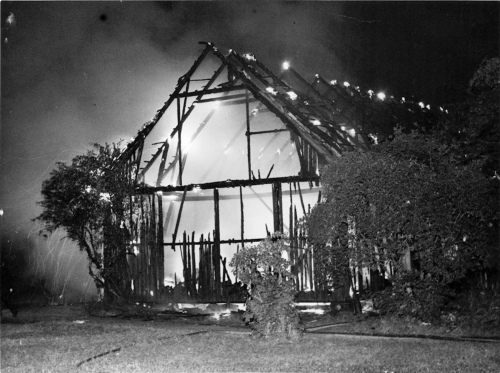 A misunderstanding regarding notices for Blacktip Island’s inaugural Renaissance Faire Wednesday resulted in four arrests, nine injuries and the venue’s destruction after a series of purposely-set fires, organizers said.

“We had a flyer-writing party to divvy up the workload, and some of them had a minor gaffe in them,” the island’s Society for Creative Anachronism shire grand seneschal Jay Valve said. “Clete Horn left the ‘a’ out of the ones he did, so they read ‘Renaissance Fire. A handful of folks took that literally and torched everything.

“The first sign of trouble was Dermott Bottoms and his buddies showing up wearing Viking helmets made from buckets and carrying tiki torches,” Valve said. “We thought they just wanted to be part of the spectacle. Then they sparked the tents, the food shoppes and the stage. The whole village burned in less than 15 minutes.”

“We were so excited to have our first Ren Fest on Blacktip,” Angela Fisher said. “The kiddos were enjoying their gruel-on-a-stick when—bam—yahoos started burning everything. We were looking forward to the jousting-on-hobby horses, but they even burned the horses. Then a vat of mead exploded all over us. The little ones are traumatized.

“The tents, and the dunk-a-wench booth took ages to build,” Fisher said. “And there’s hundreds of conch fritters ruined, and kegs of ale destroyed. They even burned some nearby docks. And the library. Thankfully, the librarian saved both books. I don’t know how we talk to the kids about this.”

“Couldn’t get here in time to stop the fires, but I’ve got the perpetrators locked up,” Island Police Constable Rafe Marquette said. “No surprise it was Dermott Bottoms, James Conlee, and Linford Blenny. The fourth, Catalina Luxfer, is chained to my office desk since we only got one cell and I can’t put her in with those yobbos.

“Nine folks went to the clinic with injuries, mostly smoke inhalation,” Marquette said. “And Lee Helm’s got second-degree burns from running into a food booth to steal corndogs. I’m still tallying what to charge who with.”

The arsonists defended their actions.

“Organizers’ fault, you know, putting them signs up for a Renaissance Fire,” Dermott Bottoms said. “We thought the flyers about a ‘faire’ were mistakes. ‘Fire’ makes more sense. Who the hell spells ‘fair’ with a ‘e’? They didn’t want stuff burned, they should’ve been clear on that.”

“We was just joining in, dressed like Huns since they didn’t have any of those yet,” Bottoms said. “Seemed odd they wanted that stuff burned, but we were happy to do our part. Thought it went off pretty well. It all burned real good. And fast. And that was a lot more fun than folks playing lutes and dressing funny. Can’t wait to do it again next year.”