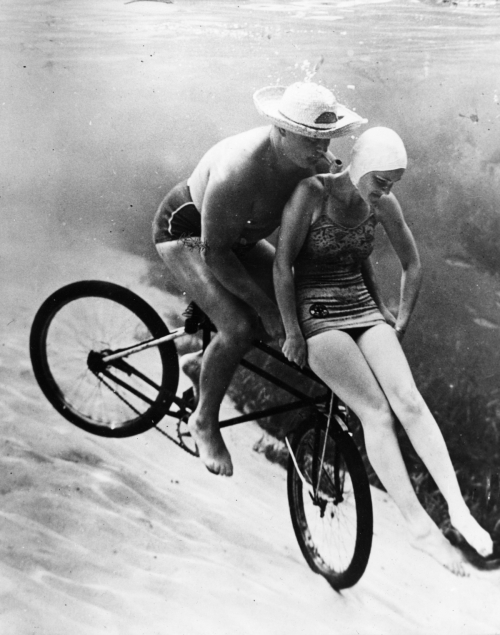 “We all like biking, but Blacktip’s a tiny little rock and it gets awful boring after a while,” BICS president Billy Ray said. “Most of us’re scuba divers, too, so we figured, why not combine the two? I mean, folks ride bikes underwater as stunts all the time. We just expanded the idea to take full advantage of it.

“Started with us jumping bikes off Diddley’s Landing, then trying to pedal across the sand,” Ray said. “That put us in mind of a cross-country sort of course, only underwater. Pedaling in sand, you get bogged down pretty damn quick, so we laid out a crushed shell track. You can get some good speed up looping around them coral heads, depending on your bike and tank configuration.”

“People’re strapping dive weights to bottoms of their frames to keep the bikes on the track,” Chrissy Graysby said. “We’re wearing big-ass weight belts, too, for added traction. It’s a fine line between weighting and drag reduction.

“Skinny riders do best, duh, but we’re all monkeying with hydrodynamic suits and smaller scuba cylinders,” Graysby said. “Some racers are going with just a Speedo and a pony bottle. That can bite you though—you run out of air before you finish the course, you’re disqualified. And’ll probly drown if you don’t ditch your weights quick-like-the-bunny.”

“This track is an absolute nightmare,” Blacktip Island REEF president Harry Pickett said. “We’re trying to protect the reefs, now there’s yahoos tearing around it on bikes, ripping up the ecosystem and trashing thousands of years of coral growth. You should see the ruts those damn tires are cutting across the reef.”

Other locals complained about the racer’s effect on underwater wildlife.

“Used to go out in the evening, catch dinner,” James Conlee said. “Now, Billy and them’ve scared off all the fish with this dumbassery. Had to buy dinner from the store all this past week. Cost me a bloody fortune.”

“We don’t get close to coral. We made sure of that when we set up the course,” Leigh Shore said. “And any ruts get filled in with sand every time a storm comes through. Sure, the fish were spooked at first, but now they’re kind of curious and come check us out. There’s more fish than ever now. James’ll see. Eventually.

“Right now our focus’s on expanding the track,” Shore said. “We’re building bikes with steel frames so you don’t need to weight them down. And we’re gonna extend the course all the way around the island so we can have Tour de Blacktip races.”