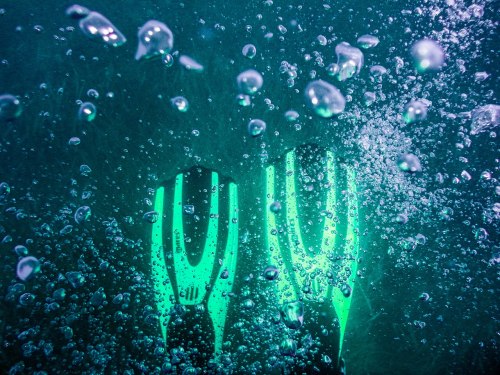 Blacktip Island scuba divers now have the option of generating electricity for the Caribbean island’s power grid by attaching modified wave converters to their fins. (photo courtesy of jqpubliq)

“Electricity’s expensive on this little rock, and burning diesel to generate it is hell on the environment,” Department of Public Works chief Stoney MacAdam said. “We’re going green and sustainable by strapping mini wave energy converters to divers’ fins and offloading the power they produce into the power grid.

“We don’t have the funding to launch a large-scale offshore facility, but the dive operations have helped defray the cost of these person-scaled oscillating surge converters,” MacAdam said. “Volunteer divers clip them on their fins, run a wire up their legs, and the energy produced gets stored in a battery pack on their BC. They turn the batteries in to the dive shops, the shops offload the electricity and the divers get discounted diving.”

The program is not without its hitches.

“We’re still in the pilot stage, but it’s been good overall, with only a couple of minor electrocutions” Eagle Ray Divers operations manager Ger Latner said. “Participating guests get a discount on their diving commensurate with how much electricity they generate, and volunteers are lining up despite the occasional zap.

“The big worry was how the batteries would hold up, but they’re doing fine,” Latner said. “With the lithium-ion puppies we’re using, you can slam power into them, then pound it back out without any negative effect. And the battery packs come with a quick-release buckle in case they overheat.”

“We’re helping the environment and getting a discount,” Gina Marlin said. “My husband and I made a game of it. We kick as big as we can, as fast as we can, to create as much power as possible. Then on safety stops, we race around the boat to make sure our batteries are jam packed.

“The only drawback so far is my collector battery drained some, and I didn’t get full credit for all the juice I produced,” Marlin said. “Whether that was a glitch or a bait-and-switch, I didn’t get nearly the credit I should have. Trip Advisor’s getting a smoking review about that.”

Some island dive staff are unhappy with the program.

“Clean energy’s good, but now we have yahoos doing big-ass flutter kicks to get their mondo discounts,” divemaster Alison Diesel said. “The punters are blasting up sand and kicking the crap out of the reef just to save a few bucks. End of the day, this is worse for the coral.

“We beg people to use smaller kicks, to scull, so they don’t silt up the reef” Diesel said. “Now this is electric fin BS has them doing the opposite. What’s next, overweighting everyone so they kill even more coral?”

“The scuba hippies can complain about damaged coral all they want, but this is good for the island overall,” MacAdam said. “The upside of this far outweighs some isolated reef damage.”