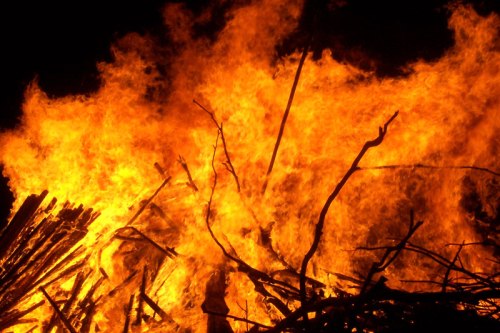 Blacktip Islanders are still in shock after a glitch in the lighting ceremony caused the community Christmas tree to go up in flames Wednesday evening. (photo courtesy of Fir0002)

“The lights were strung, the kids’ ornaments were hung and the tree was perfect,” chamber of commerce President Kay Valve said. “We were all gathered around the tree, holding hands and singing “I Believe in Father Christmas,” then WHOOSH! We had a Christmas fire-nado.

“Dermott Bottoms had been working on the tree and the holiday bonfire and got confused,” Valve said. “When we said, ‘light the tree,’ he took that literally and held a lighter to it. The rum on his breath acted as an accelerant. For a second he looked like a holiday dragon.”

“The crowd was ducking for cover, and people were rolling on the ground to put out the sparks on their clothes and hair,” Rusty Goby said. “Other palm trees went up, too. The flames got up high in the fronds and spread, well, like wildfire.

“We formed an ad-hoc volunteer fire brigade—basically anyone sober enough to handle a bucket or wield a hose,” Goby said. “Somehow we managed to save the nearby structures. That’s our Christmas miracle this year. The whole community’s still in shock, though.”

“Little Shelly Bottoms lost an eyebrow,” island nurse Marissa Graysby said. “She’s scheduled for some heavy-duty therapy as soon as the holiday season’s over, but, then, we all are. The only other person injured was Dermott, but his skin’s so tough, he only has first-degree burns. I’m pretty sure he still doesn’t feel anything.”

Some worried about the long-term impact on the community.

“We tried the Whoville thing where we gathered around what’s left of the tree and sang holiday songs, but that fell flat, and people choked on the ashes,” Elena Havens said. “Now we’re moving ahead with an alternative community tree to regain a sense of the holidays.

“We’ll have a Christmas sea grape shrub instead,” Havens said. “It’ll be festive and fire resistant. We’re also taking donations for new strings of lights, and the school kids are in overdrive making replacement ornaments. That’s helping a lot of them work through seeing their other ornaments incinerate.”

Others in the community downplayed the incident.

“It’s Blacktip Island. It’s not the holidays unless something goes horribly wrong,” Clete Horn said. “This year, the catastrophe’s out of the way early. Now we can relax and enjoy the rest of the season in peace.”