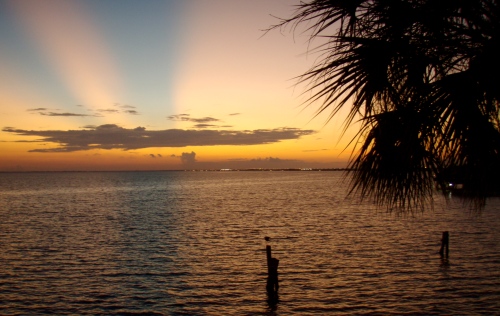 Blacktip Island leaders hope an island slogan contest, open to all, will give the Caribbena island a competitive advantage in the growing tourism wars. (photo courtesy of Wendy Beaufort/BT staff)

Blacktip Island leaders Friday announced a contest to create a motto for the small Caribbean island to use in promotions in order to stand out among other vacation destinations in the region.

“With so many islands, we get lost in the shuffle,” island mayor Jack Cobia said. “Our resorts have seen a drop in occupancy across the board. Most people get to Tiperon and stop. We’ve got a whizz-bang marketing plan to address that, but it all hinges on a catchy slogan.

“The Bahamas have ‘Life Is Grand.’ Saint Lucia has ‘Simply Beautiful.’ Greater Tiperon has, “Surface With A Smile.’ They’re all eating our lunch, tourism-wise,” Cobia said. “We made a suggestion box for anyone on the island, local or visitor, and as soon as we get enough entries, we’ll pick the best ones and have an island-wide vote.”

Organizers say the contest is off to a spirited start.

“We’ve had more suggestions than expected, and you can tell people are taking the contest to heart, no matter how misguided,” contest chair Kay Valve said. “We’re anticipating more, and more appropriate suggestions this week.

“We’re keeping the process as democratic as possible, within reason,” Valve said. “We’ll disqualify anyone stuffing the box, and anything too malapropos, but at this point we’re letting the public have its say.”

Valve said the leading entries so far are:

Some in the community say the contest is misguided.

“Popularizing the island will be the worst disaster since building that electrical power plant,” Pickett said. “We need to be tearing down resorts and sending people away, not encouraging more. The next thing you know, we’ll have paved roads and we’ll have lost our charm.”

“Progress doesn’t have reverse gears,” Cobia said. “We’re looking to the future. We can’t afford to fall further behind those Tiperon rat bastards on this one.”