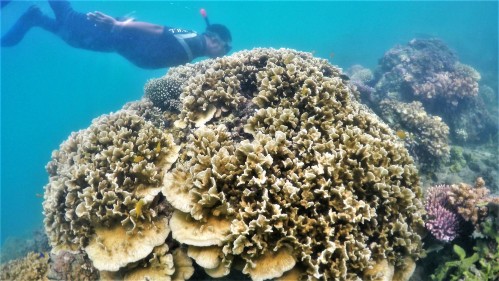 The Blacktip Island Community Players will stage their annual spring play this Saturday and Sunday underwater near the Sand Spit bar to raise money for island charities.

“Reef of Dreams is a tropical re-imagining of Field of Dreams,” director Doris Blenny said. “Lee Helm got a wild hair up his butt and rewrote the screenplay at the bar one night. We were dubious at first, but Lee was adamant.

“‘When the primal forces of nature tell you to do something, you do it,’ is how he put it,” Blenny said. “Lee’s take is a dive resort owner hears a voice and builds an underwater dive shop, hoping Émile Gagnan will pay him a visit.”

“It’s set on a reef, and we had to have some way to speak our lines,” BICP member Alison Diesel said. “We schmoozed the manufacturer to donate the masks. They really add to the dramatic feel. ‘Ever hold a wet wetsuit to your face?’ just doesn’t have the same punch on the surface.

“The underwater speakers give a way-eerier feel to The Voice, too,” Diesel said. “The first time Elena whispered ‘Oui, he will come,’ it totally freaked us out.”

Helm stressed the BICP have gone to great lengths to keep the performance from seeming derivative.

“It captures the film’s spirit without copying its trappings,” he said. “It’s set on a reef, not in a cornfield. There’s no crops of any kind. Or ball-related sports. And in the end, it turns out the voice was talking about Sir John Haldane all along.

“There’s minimal props, so a lot of it’s open to interpretation,” Helm said. “All the acting’s in mid-water, too, so the stage doesn’t get all silted. And we recruited about 40 resort guests as extras to make a long line of dive lights at the end, all coming to the underwater shop.”

The performance will be transmitted to the Sand Spit and the Heritage House, where non-scuba divers can view the show for an additional fee.

“We’ll have five different camera angles, so no one misses any of the action,” Blenny said. “You can really see the tension build on all the actors’ faces when it looks like Ray will lose his resort.

“The show stopper’s when Gage asks, ‘is this heaven?’ and Lee says, ‘no, it’s Blacktip Island,’” she said. “In rehearsals, it brought the house down. Several performers nearly drowned.”

Proceeds from the performances will go to Blacktip Island Habitat for Humanity.