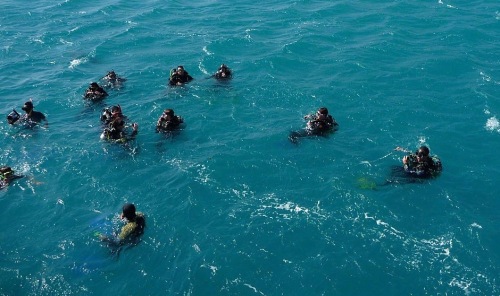 A Blacktip Island resort is capitalizing on the current sleep gym craze by starting an underwater napping program on the Caribbean island’s west coast sand flats this week.

“Big rubber bands keep the regulator in your mouth, and big weight belts keep you stuck to the sand,” Havens said. “There’s such a stigma attached to napping. Dive-N-Nap lets you say ‘I’m going diving’ and spares you the embarrassment of saying you’re napping.”

Participants say the sessions are more restful than regular napping.

“You feel like you’re really part of the ocean,” Dusty Blenny said. “Turtles wedge themselves under ledges to sleep all the time, so this is kind of the same thing. Instead of swimming around the reef for 45 minutes, you can lie down and have a bit of sleep.

“You get in whatever sleep position is comfortable, then they weight you down,” Blenny said. “There’s soothing music the whole time – yesterday was Miles Davis, today it was Enya – then bang a gong at the end of the session.”

Organizers countered worries the classes are unsafe or harm the environment.

“We’ve always got two dive staff in the water,” Blacktip Haven divemaster Booger Bottoms said. “Anything goes wrong, they’re there to help, Johnny on the spot. Usually to fetch pillows.

“And it’s in the sand off Diddley’s Landing, where the barge comes in,” Bottoms said. “Nothing lives there. We learned to schedule sessions for when the barge isn’t coming in after that first incident.”

Some on the island questioned the need for the activity.

“Why pay to sleep underwater when you can just nap at home or at work?” bartender Cori Anders said. “Or on your favorite dive site? It’s something different, and I’m gld Elena’s making money with it, but I don’t see it lasting.”

Havens brushed such concerns aside.

“Dive-N-Nap has a strong social draw,” Havens said. “Most participate to be part of something bigger than themselves. And our staff monitors everyone’s air use to make sure there are no nasty surprises.”

“It’s so much more relaxing than terrestrial napping,” Havens said. “That’s desperately needed on this island. People here are far too stressed.”

Dive-N-Nap staff cautioned the activity is not without its drawbacks.

“Most people need a thicker wetsuit, since you lose body heat more quickly when you’re just laying there,” Bottoms said. “The up side’s the shivering burns calories, so it’s great for weight loss.

“Divers are welcome to just chill without falling asleep, too,” Bottoms said. “The only complaint we’ve had is Dive-N-Nap doesn’t help with a hangover. Even on nitrox.”