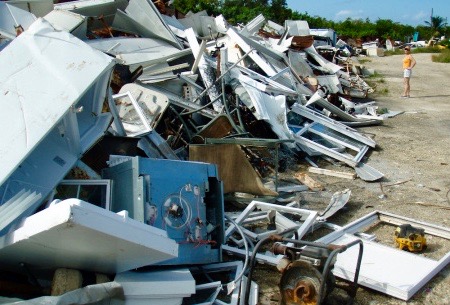 “We closed the dump’s for all but our garbage trucks last week while we spruced the place up,” health department head Stoney MacAdam said. “We needed the place free of people while we put in a new incinerator and rearranged the junked auto section. It’s just coincidence we’re re-opening the place this Friday.

“Thing is, we underestimated how popular dump diving is this time of year,” MacAdam said. “People were already lining up along the entrance track Thursday, so we threw up gates and barriers in the interest of safety. Folks being deprived of scavenging for so long, it’s made them bug-nutty. Well, more bug-nutty.”

Residents say the impromptu event is the perfect start for the holidays season.

“It’s the Blacktip version of the Black Friday sales in the U.S.,” resident Ginger Bass said. “And now with no one being able to get in the dump for a week, there’s bound to be all kinds of great stuff all over the place.

“The trick’ll be getting in fast,” Bass said. “We have our little ones ready to go at the main entrance, and we’ll circle around the back to be the first ones in back there. We’d never sneak in ahead of time, of course. That’d set a bad example for the kiddos. But we’ll all charge in quick as we can when they blow that whistle.”

Some decried the event’s commercialism.

“It’s the holiday season. The focus should be on the holidays,” the former Reverend Jerrod Ephesians said. “People descending on the landfill en masse to pick through junk isn’t festive. It’s crass. And unsanitary.”

Island emergency personnel will be on alert during the event.

“We have volunteer medics, bandages and stretchers ready to go,” Island Police Constable Rafe Marquette said. “And pickup trucks to haul any injured shoppers to the clinic.

“We also have the fire truck with its water cannon, primed for crowd control,” Marquette said. “Any fights break out, we can blast the troublemakers out the other side of the dump. And won’t hesitate to do so.”

Landfill officials expect the morning to be violence free.

“We’ve warned everyone about the need for civility,” MacAdam said. “Sure, there’ll be some pushing and shoving, but that just adds to the holiday atmosphere.

“Our aim is to create a safe environment for the children to scavenge in,” MacAdam said. “We didn’t plan on this becoming such a big deal, but we’re going to make sure it’s a family event now that it is.”