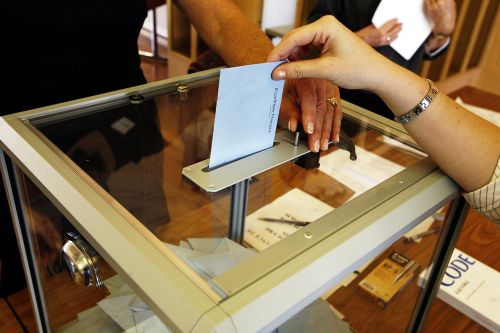 The theft of Blacktip Island’s ballot box Thursday has put the election on hold and left the small Caribbean island leaderless. (photo courtesy of Rama)

The 2018 Blacktip Island mayor’s election was stymied Thursday when a supporter of one candidate stole the island’s sole ballot box in an attempt to forestall that candidate’s defeat.

“As always, Jack Cobia was set to win by double digits, this time over political newcomer Val Schrader,” Elections Supervisor Belinda Graysby said. “Then Dermott Bottoms decided to weigh in. He got a snoot full of rum, grabbed the ballot box and ran.

“It was more personal than political,” Graysby said. “Dermott’s always had a thing for Val. Nearest we can guess, he stole the election so she’d notice him. He’s holed up in the church now, howling her name and claiming sanctuary or some such nonsense.”

“This was a planned political op from the get go,” incumbent Jack Cobia said. “Val knew the only way she’d win was by cheating. And that Dermott’d do anything for her. He’s probably tearing up ballots as we speak. Or eating them. Dermott’s not bright, but he has a certain low cunning.

“Bottom line is, until there’s official, verified results, I’m still the mayor,” Cobia said. “There’s got to be continuity of leadership, for the island’s sake, and I’m the one to provide it.”

“I never I encouraged Dermott. About anything,” Schrader said. “He’s just bat-shit crazy. Always has been. I’m trying to lead the island, not deal with some cow-eyed drunk.

“Jack pulled every dirty trick in the book to rig this election, and I wouldn’t put it past him to have put Dermott up to this,” Schrader said. “But that doesn’t make stealing ballots right Win or lose, this isn’t how democracy works.”

The stolen votes have thrown island politics into a tailspin.

“Jack’s term expired midnight. Period,” resident Frank Maples said. “With the votes uncounted, technically Blacktip has no mayor. Jack can bluster all he wants, but he has no legal authority. And Blacktip’s mayor-less.

“Rafe Marquette’s trying to talk Dermott into giving up the box, but Dermott’s having none of it,” Maples said. “Jerrod and Gage snuck in and tried to steal it, but they got whacked up pretty bad. Dermott’s an unholy terror when he’s riled. And drinking. All indications are he’s got into the Communion wine.”

“Our aim’s to get Dermott out of the church so he’ll stop ringing those damn bells non stop and screaming, ‘Val!’ from the rooftop,” B.C. Flote said. “Rafe Marquette popped him with a couple of tranquilizer darts, but Dermott seemed to enjoy them. I guess he’s built up a resistance to pretty much everything. Except misplaced emotions.”