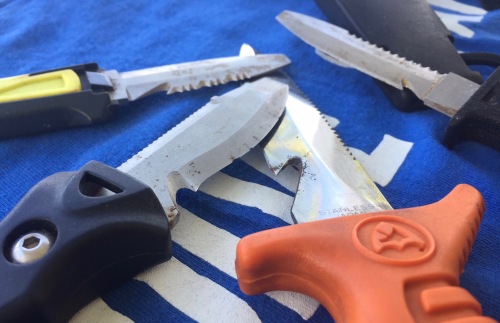 “People are already chucking knives on the sly on dive boats and behind bars late at night,” Eagle Ray Divers manager Ger Latner said. “Might as well bring it out in the open, make it an official thing. It’s part of scuba culture that’s been hiding in the shadows too long. And our boats are taking a beating.

“It’s open to all types of knives and all throwing styles,” Latner said. “The only restriction is our lawyers say contestants have to wear safety glasses, but a dive mask with tempered glass’ll do.”

Contest organizers were still working out the details of the event Thursday.

“We’ll have wooden targets on the dock at three, 10 and 15 feet,” Blacktip Chamber of Commerce Kay Valve said. “We’re also looking at the possibility of adding an underwater round, to really tie the contest in with its scuba diving roots.

“The grand prize is the coveted Silver Flash Dive Machete,” Valve said. “It’s a 12-inch, chrome-plated, pointed-tip Lloyd Bridges Commemorative Edition. With the handle, it’s as long as your thigh. Everyone’s hot to win that puppy.”

Latner said contestants will be asked not to drink until after the competition has ended.

“Originally, we planned on alcohol being just another variable,” he said. “Historically, knife throwing and drinking go hand in hand, and we really are trying to reconnect to our roots with this.

“Our attorneys put the kibosh on that right quick, though,” Latner said. “We’re taking the safer route, under protest, but, of course, we can’t stop folks from boozing up on the sly.”

Other organizers stressed the weekend is about more that flying knives.

“It’ll be an event that appeals to the whole family,” Christina Mojarra said. “We’ll have knives for sale, knife sharpening booths, and we’ll sell food, t-shirts and other chotskies.

“Also, Gage Hoase’ll be doing coral carving,” Mojarra said. “With a couple of knives and a chunk of coral, he can chisel out little seahorses, turtles, you name it, in no time flat. We’ll have kids activities, too, like the mumbley-peg contest. The younger kiddos will wear close-toed shoes, but the bigger ones will compete barefoot.”

The tournament is sponsored by dive knife manufacturer Wenoka.