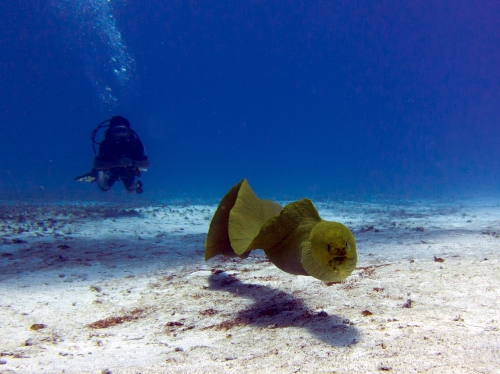 In an effort to reduce stress on Blacktip Island, one local resort this week began offering underwater screaming sessions for its guests and island residents.

“We noticed our divers seemed more stressed than usual lately and decided to do something about it,” said Club Scuba Doo diving manager Finn Kiick. “Everybody’s doing the meditation bit these days, so we decided to take a different tack.

“It’s a throwback to the primal scream craze from the 70s,” Kiick said. “The retro thing is all the rage. We call it ‘submerged hollering’ to avoid legal trouble.”

“Everything about it’s relaxing,” Club Scuba Doo scuba instructor Rosie Blenny said. “The water’s calming. The fish are calming. And when you let out that first yell, your stress evaporates. Underwater, they can hear you scream. And that’s a good thing.

“After the first scream all the fish disappear, but at least they’re there to set the tone,” Blenny said. “The only hitch is sometimes it’s hard to tell the difference between a participant and a diver in actual trouble, but we’re getting better at sorting that out. Mostly.”

“I can yell all I want on my own, but it doesn’t do me any good,” Club Scuba Doo guest Marlin Bleu said. “But with this we sit in the sand, like those drum circles men’s groups used to do. Except not in our underwear. We wear shorts. It’s different.

“We give ourselves fish names and scream them through our regs,” Bleu said. “I’m Parrotfish-Who-Nibbles-Earlobes. I was so relaxed at the end of the first class I could barely climb up the dock steps.”

Organizers dodged environmental minefields by staging the sessions outside the marine park.

“It’s Blacktip, so someone’s going to complain to matter what we do, but we nipped the fish-hugger protest in the bud,” Kiick said. “We do classes in the sand out from Diddley’s Landing where there’s no coral to kill.

“The big thing’s not to have sessions when the barge’s coming in,” Kiick added. “That surprised last week. The hull slid over us and blocked out the sun, and the big-ass props were spinning like giant Cuisinarts right above us, it was like the end of the world. People screamed alright, but not in a good way.”

“I laughed at first, then tried it on a dare, and it actually works,” Sand Spit bartender Cori Anders said. “I’m up to three sessions a week now, and my blood pressure’s down a good 20 points. My throat’s raw, but at least I’m not yelling at guests anymore.”