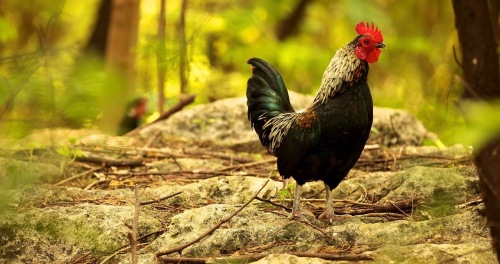 A wild chicken stands lookout near the Blacktip Island dump Thursday, watching volunteers set a trap for feral cats. Island officials worry the chickens and cats are colluding to take over the small Caribbean island. (photo courtesy of DIAC Images)

Wild chicken and feral cat population increases on northern Blacktip Island, coupled with possible coordination between the species, have many locals concerned about public safety Thursday.

“There’s always been chickens around the airfield, and mangy cats around the dump,” resort owner Elena Havens said. “But nowhere near this many. And they always avoided each other.

“Now, though, we’re eat-up with chickens from the Tale Spinner bar all the way south to, Sandy Bottoms’,” Havens said. “It happened overnight. And now you always see chickens hanging out with cats. Staring you down. Stalking you. It’s not natural.”

“Damn roosters are crowing all night. Guests can’t sleep,” Sandy Bottoms Beach Resort owner Sandy Bottoms said. “We got chickens running across the bar. Eating all the popcorn. Pooping on the pool deck. Bookings are down and complaints are up.

“And this is migratory bird season, you know,” Bottoms said. “Bird watchers from all over come here to see the exotic birds. The cats have eaten them all, though. The birds, not the birders. No birds to see now but chickens. My resort’s half-empty.”

“We know feral chickens and cats carry transmittable diseases,” public health chief Herring Frye said. “But every time we try to catch a cat to study, the chickens swarm all over us, and vice versa. It’s like a bad horror movie.

“These two species are normally enemies,” Frye said. “If they’re in cahoots, the worry is they’ll take over the entire island, potentially make it uninhabitable for humans.”

“We’ve tried to cull their numbers, but the critters seem to know when we’re coming. And what kinds of traps we set,” Rocky Shore said. “Either they’re all smarter than us, or they’re working together.”

“When we were setting cat traps at the dump, you should’ve heard all the clucking and crowing,” Molly Miller said. “Then the hens charged us. There were feathers flying everywhere. I didn’t know there were that many chickens on the island.

“There’s been some ugly incidents with tourists, too,” Miller said. “A bunch of them got their heads pecked outside the store. And a bunch of cats blocked the airstrip yesterday. The plane couldn’t land, but it was fun watching people trying to herd them off the tarmac.”

Some locals spun the situation as positive.

“All I know is the rat population is way down,” said Lee Helm said. “I reckon that’s the chickens’ motivation: with the rats in decline, they get a bigger share of food at the dump. And in peoples’ kitchens.”

Others are fighting back.

“We got coq au vin on the nightly dinner menu now,” Sandy Bottoms said. “And folks with lionfish spears chasing down roosters morning, noon and night.”