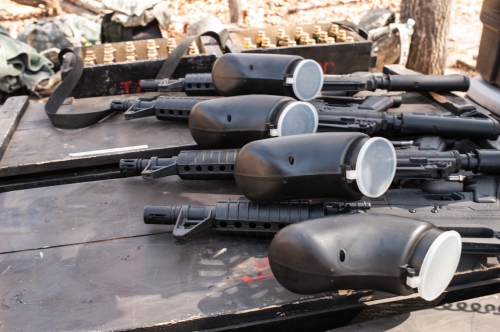 “Columbus isn’t the hero here he is in the U.S.,” island historian Smithson Altschul said. “His arrival brought disease, genocide and slavery. The Expat Derby started as a way for locals to vent their anger at foreigners without anyone getting hurt too much.”

“In the old days, there’d be fights. Blood would flow,” Altschul said. “Community leaders started the tradition of throwing red snappers at expats instead, to decrease the violence. Then paintball guns came along and we switched. The pellets sting, but red paint’s better than blood. And it doesn’t waste food.”

Paintball guns, normally banned on the island, are regulated by the local police.

“I issue guns and paintballs in the morning, then collect them all at the end of the day,” Island Police Constable Rafe Marquette said. “There’s also strict rules concerning how the devices are employed.

“It’s body shots only, preferably above the belt,” Marquette said. “And tourists are strictly off limits, for obvious reasons. Any violators forfeit their paintball rights next year.”

Blacktip natives say the derby brings the community together.

“It’s a fun tradition that keeps resentments from getting too out of hand,” local Ger Latner said. “The island’s expats understand. Most seem to enjoy it.

“End of the day, we’re all still good friends,” Fletcher said. “We get together for drinks and to patch up any wounds in the evening. No hard feelings.”

“I just go out early, in a white shirt, and let them pop me a few times,” island Mayor Jack Cobia said. “People see a couple of splats on you, they’ll move on to someone else. Usually. I wrap my torso in towels, too. Those paintballs raise an ugly welt.

“End of the day, it keeps peace in the community,” Cobia said. “There’s a lot less locals-versus-expats hostility on Blacktip than most Caribbean islands. Bruised ribs are a small price to pay.”

“I wear a scuba mask, just in case, but it’s not a big deal,” said resident Hugh Calloway. “Antonio, he drilled me good yesterday morning, right in the chest, as I stepped out my front door. Then he gave me a ride to work. And we had a drink on the way.”

“There’ll be no paintball next year for Dermott Bottoms and James Conlee,” Constable Marquette said. “They got in a shootout with each other in front of the store. Several windows were broken, and the police vehicle will need to be repainted. I also have to buy a new police uniform.”

One response to “Blacktip Celebrates Columbus’ Landing With Paintball Shootout”