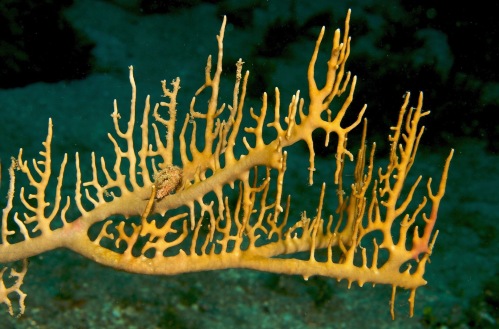 A stand of encrusting fire coral waits in the shallows of Blacktip Island’s Fire Coral Reef. Saturday the island will celebrate the benefits of fire coral in protecting the Caribbean island’s reefs. (photo courtesy of Nick Hobgood)

Blacktip’s annual Fire Coral Festival returns to the island Saturday at multiple venues and dive sites to celebrate the importance of the stinging coral in protecting the island’s fragile reefs. The festival, in its 17th year, is sponsored by the Tiperon Marine Parks department.

“It started years ago after overweighted scuba divers came back all welted up, howling about our reefs being eat-up with the fire coral,” Marine Parks spokesperson Val Schrader. “We put a positive spin on that. If you can’t beat it, celebrate it, if you will.

“Our aim is to remind divers that the slightest touch can harm coral,” Schrader said. “Fire coral lets divers experience how much coral can hurt them. We’ve found pain is a great tutor.”

“The highlight’s the ½-K Fun Run,” festival organizer Jay Valve said. “Runners in Speedos and flip-flops sprint past Eagle Ray Cove chased by other runners grabbing at them with fire coral-coated gloves. It’s amazing how fast folks can go when they’re about to get stung. There’s some hefty guests here, but they’d give Usain Bolt a run for his money.

“Of course, medical staff’ll be on hand to deal with any cases of anaphylactic shock,” Valve said. “Some people also wanted to throw jellyfish at the runners, but we nixed that. This is a fire coral-only event. No other stinging life forms are allowed. That’s another festival. In the fall.”

The festival has also fostered a rare détente between tourism and environmental groups.

“Normally we’d be against anyone touching coral, but this is for a great cause,” said Benthic Society president Harry Pickett. “Fire coral’s the reef’s great defense, the way the ocean strikes back at people who don’t respect it. We call fire coral ‘reef karma.’”

During the festival, all Blacktip Island dive operations have banned the use of wetsuits.

“It’s a reality check for divers who don’t realize, or care, how crap their buoyancy is,” said Eagle Ray Divers ops manager Ger Latner. “It’s part of the festivities. Each dive boat votes for the guest with the worst buoyancy control, then we make all those folks scuba naked across Fire Coral Reef.

“Yeah, it’s painful. And humiliating. But it makes a point,” Latner said. “And the divers gets free drinks the rest of the night. And a t-shirt. And free medical care, if needed.”

All proceeds from the festival go toward replacement mooring balls and lines for the island’s dive sites.