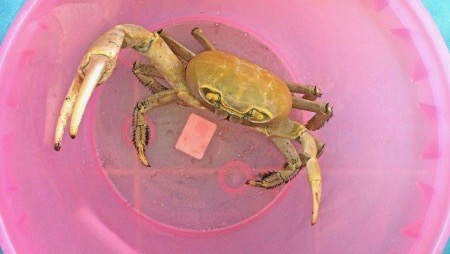 “It’s a tradition from generations ago that teaches kids foraging skills,” organizer Doris Blenny said. “We dye land crabs bright Easter colors, dump them on the lawn, give them a five-minute head start, then turn the kids loose.

“Only four children live on the island, so it doesn’t have much impact on the crab population,” Blenny said. “Plus, we use water-soluble food coloring that doesn’t harm the crabs. And non-colored crabs don’t count.”

The hunt is not without its hazards.

“A kid’ll get pinched every once in a while, but that just toughens them up,” Hunt Marshal B.C. Flote said. “It’s part of the learning process. And they won’t make that same mistake twice.

“We fit the smaller kiddos out with oven mitts and baseball gloves,” Flote said. “It’s a hoot watching them run around in their Sunday-best clothes, diving willy-nilly for crabs under the sea grapes.”

Prizes will be awarded to whoever collects the most crabs and whoever finds the biggest crab.

“The biggest challenge is keeping the crabs in the Easter baskets,” Blenny said. “Last year several children lined five-gallon buckets with plastic Easter grass. No crabs got out, but afterward it was impossible to separate the crabs from the grass, and some good chocolate got ruined.”

Adult residents are looking forward to the hunt as well.

“It just isn’t Easter without it,” resident Olive Beaugregory said. “My little ones so love getting together to dye the crabs the night before. And you should hear them scream as they chase the crabs. Even before anyone gets pinched.

“They love seeing Dermott dressed as the Easter Crab, too, handing out the chocolate crabs,” Beaugregory said. “Even if Mr. Crabby does smell a bit like feet. And rum.”

As ever, island authorities cautioned residents to be on guard against crab-related vandalism.

“Every year we get folks – kids and adults – slipping painted crabs inside peoples cars and houses,” Island Police Constable Rafe Marquette said. “It’s the only time of year people lock their doors and windows. Those crabs can be a messy surprise.”