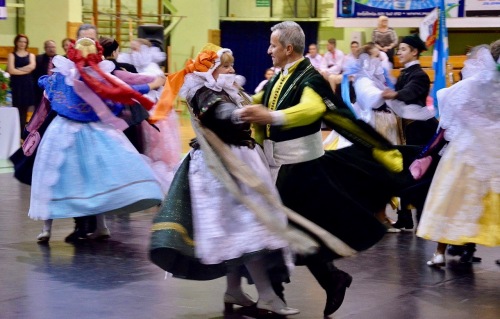 Alison Diesel and Gage Hoase practice their quadrille Thursday evening at the Blacktip Island Heritage House. Dancing is one of many social skills being taught to island dive staff in a new cotillion class aimed at boosting tourism on the island. (photo courtesy of Silar)

Faced with a growing number of complaints about rude dive staff, Blacktip Island community leaders and etiquette activists have joined forces to create a cotillion program aimed at the Caribbean island’s divemasters.

“We got loads of guest complaints from every resort on the island,” mayor Jack Cobia said. “It ranged from not saying ‘hello,’ to sarcastic remarks, to snatching food from guests’ hands. Dive ops fire the bad apples, but the replacements’re just as bad.

“When word hit travel review sites, we knew we had to do something drastic,” Cobia said. “It was killing our tourism product.”

The solution was to recruit the island’s gentry.

“Jack could have been describing wild animals,” long-time resident Helen Maples said. “He asked if I might teach the rascals manners, deportment, dancing and other social graces.

“I was delighted! I’ve wanted to institute a regimen like this for years,” Maples said. “The next evening I lined up a dozen hostile scuba hippies, and whacked them with a ruler if they didn’t stand up straight.”

Cobia is cautiously optimistic about the course.

“Honestly, it’s a pilot project,” he said. “But if it works, we may expand it to include all resort workers, then airfield staff, then anyone else in the tourism industry.

“If it doesn’t work, it’s still fun to watch,” Cobia said. “Helen tells them to imagine their granny’s standing next to them. Then, if they so much as look sideways, TWHACK! Bruce Lee’d be jealous of how fast that ruler moves.”

Predictably, many divemasters were critical of the class.

“That bloody ruler hurts,” said Eagle Ray Divers’ Lee Helm. “It’s not right, requiring us to go there and be physically abused. Mrs. Maples is a sadist, she is.”

Maples was unapologetic about her methods.

“It’s a time-honored tradition. Or should be,” she said. “The ruler reminds them to wear shoes, to speak in complete, non-obscene sentences and to pass the salt and pepper together when a tablemate requests, “Would you please pass the salt?”

Some dive staff, though, say they enjoy cotillion.

“Lee’s a whiner,” said Eagle Ray Divers’ Alison Diesel. “It’s so cool when Gage, umm, I mean Mister Hoase, comes up and says, ‘Miss Diesel, may I have this dance?’ and I say, ‘Certainly, Mister Hoase.’”

“It’s goofy, sure, but you learn proper, formal dancing,” he said. “Women dig that crap. You’ll see DMs out cutting a rug at the Sand Spit pretty much any night of the week now, practicing.

“It’s value-added on the boats, too,” Kiick added. “Run out of stories to tell during a surface interval? Now you can entertain the guests with a waltz. Or a quadrille.”