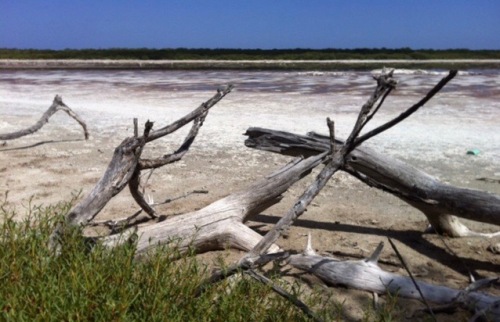 A constitutional crisis was averted Thurssday when election officials invoked a little-known amendment to make literal mud-slinging determine who will be Blacktip Island’s mayor after the candidates tied in the popular vote.

Incumbent Jack Cobia and challenger Antonio Fletcher finished the election with four votes each. At noon today the men will strip to their shorts, stand 10 paces apart in a mud pit at the island’s Heritage House and throw sludge at each other.

“Blacktip Island’s founders knew these races would get ugly,” Elections Supervisor Ledford Waite said. “They put in an appropriate tie-breaker that would reflect a messy political campaign and entertain the voters at the same time.

“The constitution say the mayor needs ‘to have a strong arm,’” Waite said. “It also states that, in the event of a draw, throwing mud establishes that ability, as well as the grit to take a shot to the face and stay standing.”

“We had to dig a mud pit quick-like-the-bunny,” said Public Works chief Stoney MacAdam. “The tricky part was mixing the mud to the right consistency. Too wet, it won’t throw. Too dry, it won’t stick.

“Had to slap together stands for 100 people, too,” MacAdam said. “Legally, we have to provide a clear viewing opportunity for the entire population so they can witness the electoral process first-hand and see the election’s not rigged.”

The last candidate standing will be declared the winner. Election observers have been on site since Wednesday to ensure no rocks, coral or other contraband are hidden in the mud.

“Last recorded mud-off was the infamous Skerritt-Bottoms contest of 1804,” Waite said. “Booger Bottoms’ supporters snuck loads of iguana guano into his section of the pit so he could throw that at Ferris Skerritt.

“The plan backfired, though, since Booger had to get hip-deep in the muck to throw it,” Waite said. “He ended up with more on him than he got on Ferris. It cost him the election.”

Antonio Fletcher was confident in his chances Friday.

“I’m not scared, you know,” Antonio Fletcher said. “Jack, he cheats at dominoes and everything else, but no way he can cheat at this in front of God and everyone.”

“If ‘Tonio thinks I’ll take it easy on him ‘cause he’s an old man, he’s got another thing coming,” Cobia said. “It’s my duty to whomp him. No way some non-alcoholic-beer drinker’s gonna represent this island.”

Island voters are eager for the contest.

“It’s perfect,” said resident Finn Kiick. “Jack and Antonio’ve been slinging figurative mud at each other for months. Time they finally used the real stuff.

“I voted for ‘Tonio, but my money’s on Jack in this one,” Kiick said. “He played Little League back in the day, and he’s still got that outfielder’s arm. He throws with his fingers together, ‘Tonio’s toast.”