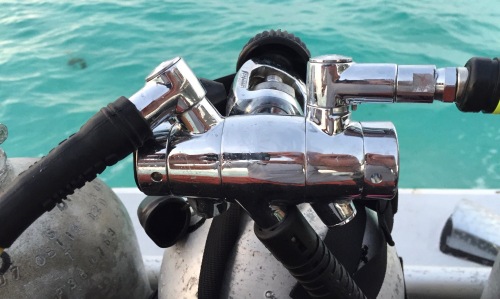 One of the Back Breaker competitor’s gear, rigged with a 30-year-old brass regulator to add extra weight to his rig. (photo courtesy of Catalina Luxfer)

Blacktip Island this week will host the five-day Back Breaker 2016 Integrated Weight Throwdown, with anonymous competitors vying to maim divemasters across the small Caribbean island. The winner will be determined by the number of divemasters injured and severity of those injuries.

“It’s like a traveling Fight Club for out of shape, passive-aggressive scuba divers,” Back Breaker organizer Catalina Luxfer said. “Divemasters are always telling us to dive with less weight. It’s so judgemental.

“This is payback,” Luxfer said. “We dive with however much weight we want, and we won’t be shamed into wearing less. They hurt our feelings; we hurt their backs.”

“The trick’s to make the BC look light, but still pack it chock-full of lead,” competitor Virgil Cracken said. “Then you tell the DM you just had surgery, and could they please lift your gear out of the water for you.

“You should see their eyes bug out when they start the lift,” Cracken said. “I tore up three backs and two elbows in the last tourney. I use my old Dacor 900 first stage just to add another eight pounds to my gear.”

Per Throwdown rules, divemasters are not told the competition is taking place until the end of the final day. Competitors will dive one day at each resort to allow equal access to all divemasters.

Injured dive staff will be examined by physicians and given x-rays and M.R.I.s to determine extent of injuries so points can be awarded accordingly.

“You score if one of your weight pockets slips out and crushes a divemaster’s toes, too,” Luxfer said. “Eighteen to 20 pounds per pocket’s a good target. Any heavier, it’s tough to disguise the bulk.”

Contestants will be disqualified if they drop below 100 feet/30 meters of depth.

“We can’t have a repeat of last year’s cock-up in Palau,” Luxfer said. “A guy with 32 pounds had a BCD inflator valve failure. He was just, WOOSH! Straight down the wall before anyone could say ‘boo.’”

“Honestly, these bozos’ll be hard to tell from our regular guests,” Eagle Ray Divers divemaster Alison Diesel said. “I mean, everybody wears 16, 18 pounds these days. Some dude last week had 22. And he was skinny, with no wetsuit.”