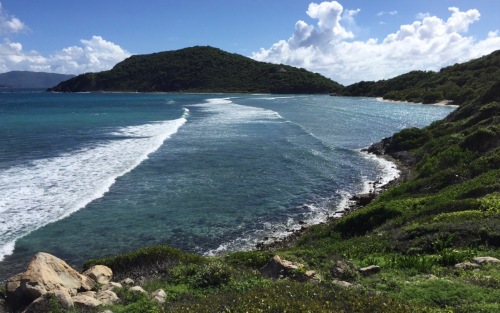 If the planned fish-kill zones are approved, large stretches of Blacktip Island’s coast such as Spider Bight will be off-limits to scuba divers.

The skunk bass, the Tiperon Islands’ national fish, has become rare on island reefs due to overfishing and habitat destruction. The plan calls for the creation of no-dive zones where only fishing would be allowed.

“First we thought the bass’d stopped biting,” said fishing advocate Clete Horn. “Then we realized the bass left about the time the scuba diving industry took off. Divers come here from all over the world. They scare the fish and damage the coral.

“If there’s diving-only marine parks on the island, there should be fishing-only parks, too,” Horn said. “Get rid of the divers, the fish’ll come back. Then we can kill bass like we used to. And teach our kids how, so they can teach their kids.”

Many Blacktip residents were surprised when local environmentalists backed the concept.

“We can’t stop overfishing, so the hope is we can limit it to certain areas,” environmental activist Harry Pickett said. “It’s a compromise, but without the fishermen’s support, no conservation plan’s going to work.

“The theory’s if all the skunk bass are removed from one area, it’ll create a vacuum,” Pickett said. “Fish from other areas will move in to fill that void and encourage increased spawning in the protected areas. Sure, a lot of bass will be killed, but this way at least some of them have a chance.”

The Department of Fisheries officials, though skeptical, also back the plan.

“Will it piss off some divers? Yeah. But it won’t keep them away. And it’s not like Clete and his buddies could ever fish the reefs clean.”

The plan has met stiff opposition among island entrepreneurs.

“Banning divers’ll kill our business,” Eagle Ray Divers operations manager Ger Latner said. “And divers won’t come here is there’s no fish to look at. If the dive industry goes under, what passes for an economy on Blacktip will go under, too.”

Fishermen are not swayed.

“These are Blacktip Island fish. They’re family,” said local angler Antonio Fletcher. “We know what’s best for them. Foreigners are welcome to come look at them, but not if it spoils our fishing.