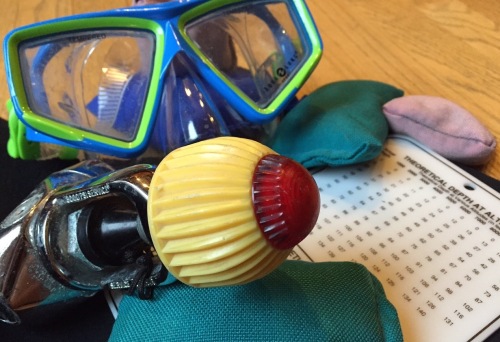 Blacktip Island scuba divers have been hit with a spate of daring mid-dive robberies while enjoying the Caribbean island’s reefs.

Blacktip Island authorities are currently investigating a string of thefts from scuba diving guests on the small Caribbean island.

“But they’re being stolen in broad daylight,” Marquette said. “That speaks to a certain audacity on the part of the thief. This morning a gentleman had a tank banger stolen mid-dive, and there’s evidence a knife was used. That’s assault.”

“We have to nip this nonsense in the bud before divers start cancelling their trips,” Eagle Ray Cove resort owner Rich Skerritt said. “I don’t care how silly the gizmos are, people have a right to dive with them. And our dive shop’s sold out of tank bangers.”

Speculation about the culprit is rampant.

“It’s got to be a local with an ax to grind,” Sandy Bottoms’ Beach Resort general manager Kay Valve said. “This island’s chock-full of crazies. It could be anyone, really.

“My money’s on a rogue divemaster,” Valve said. “These are the gadgets that drive DMs bug-nutty.”

Some guests, however, suspect a commercial motive.

“The resorts are making a fortune off this business,” said Eagle Ray Cove dive guest Buddy Brunnez. “When my fish ID slates disappeared, first thing I did was buy another set. Then they got swiped. I’ve bought three sets this week. And my wife’s on her fourth dry snorkel.”

“Whoever’s kyping the stuff is doing a public service,” Eagle Ray Divers divemaster Marina DeLow said. “She – or he – deserves a medal.

“All the Inspector Gadget crap people strap to themselves is a pain on the boat and a pain during dives. We’re having a bonfire party tonight to show our support.”

“This is our biggest crime spree since the bar tunnel-in of 2009,” Marquette said. “We’re dealing with an armed, potentially unstable individual here.”

Dive guests are taking the constable’s warning to heart.

“I’m sleeping with my Crocodile Dundee dive knife under my pillow,” Brunnez said. “No way some joker’s getting that. And my wife’s wearing her split fins to bed every night, too. Just to be safe.”