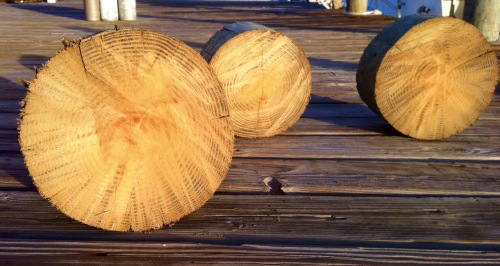 A pair of Blacktip Island divemasters have built a working prototype motor scooter made of repurposed items from the island’s garbage dump in an effort to reduce environmental damage on the small Caribbean island.

The scooter features wooden wheels made from downed power poles, a body fashioned from a condemned scuba cylinder and is fueled by biodiesel salvaged from island restaurant deep fryers.

“On a little island, sustainability’s the elephant in the booby pond,” Eagle Ray Cove divemaster and scooter co-creator Gage Hoase said. “The dump’s a ticking time bomb. So are all the cars burning fossil fuels and leaking motor oil.

“We’re killing two birds with one gadget here,” Hoase said. “There’s all kinds of good stuff in the dump, and every one of these scooters on the road means one less car.”

“We’re calling it The Re-Cycle,” Club Scuba Doo dive operations manager and co-creator Finn Kiick said. “The engine’s totally hermetic and powered by a perpetual motion hydraulic pump. Just push off, and vroom! Away you go. We wanted to name it The Flintstone, but the Hanna-Barbera suits tore us a new one over that.

“Each bike’ll be unique, depending on what people throw away,” Kiick said. “If a load of lawn furniture gets chucked, well, the next cycle’ll be a recumbent number and look like a chaise lounge. The beauty’s each one’ll be a document of what it was like to be alive on Blacktip at that certain time and place.”

Critics, however, have waxed less poetic.

“They’re not putting that junk on the public road,” Island Police Constable Rafe Marquette said. “There’s no vehicle I.D. number, no way to register it, no way to insure it. And it’s not safe. People try to ride that thing, they’ll fill up the clinic before the day’s out.”

Other critics focused on the vehicle’s potential economic impact.

“Some rolling garbage dump that don’t use gas won’t help the island economy,” Skerritt Fuel president Ferris Skerritt said. “Getting by on a shoestring like some folks are, this thing could sink us all.”

Hoase and Kiick were quick to disagree.

“These bikes’ll sell like crazy,” Hoase said. “How can that be bad for the economy? And the rental market’s unmined gold for the taking.”

“Blacktip’s a chill tropical island. Who doesn’t want to come ride a scooter on a tropical island where no one has to know about it? And if the Re-Cycle falls apart, well, we’ve sped up the composting process, then, haven’t we?”