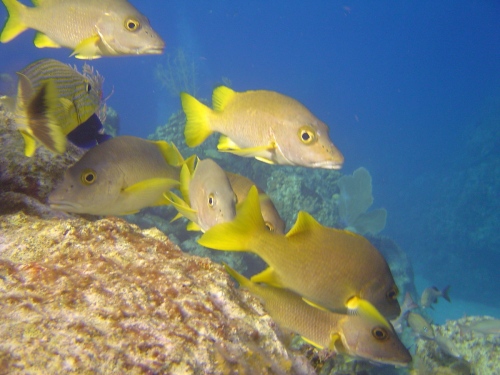 Cast members hit their marks while rehearsing for the Blacktip Island Community Players underwater production of “The Winter’s Tale.”

The Blacktip Island Community Players will stage an underwater version of Shakespeare’s ‘The Winter’s Tale’ for their spring production, with all dialogue performed with scuba hand signals.

“This play’s a spring classic,” said director Doris Blenny, “Plus, with so much of the play set on the Bohemian coast, and with scuba diving being so central to our island life, it seemed natural to cast it in an underwater milieu.”

The underwater production was inspired by the success of last fall’s semi-submerged ‘The Somonyng of Everyman.’

“This is the first Shakespearean production performed solely with scuba signs,” Blenny said. “‘As You like It’ was done in American Sign Language several years ago, and there was a mimed version of ‘Titus Andronicus,’ but we’re doing something quite different here.”

“We had to invent all kinds of new hand signals for Elizabethan words and phrases,” retired linguistics professor and cast member Frank Maples said. “‘Fardel,’ ‘bawcock,’ and ‘the verier wit’ were especially challenging.”

Lee Helm is temporarily standing in as Antigonus after the company lost several actors in rehearsal mishaps.

“That ‘Exeunt, pursued by a shark,’ stage direction’s been phenomenal in walk throughs,” Payne Hanover said. “But it’s played hell with our Antigonuses. We’ve had to replace him three times. And counting.”

The play opens on Earth Day, April 22, with all proceeds from the first day’s show going to the Coral Reef Awareness and Preservation fund.

“Our staging emphasizes reef conservation,” Blenny said. “Two coral heads will serve as the backdrops for the Kingdoms of Sicily and Bohemia.

“We also have schools of French grunts and schoolmaster snappers trained to play the respective courts,” Blenny said. “Of course, the occasional snapper will nip an actor’s fingers, but a bit of blood’s necessary for any art.”

Limited kneeling space will be available in the sand around the underwater stage. Seating and a live video feed will be available at the Sand Spit bar. The bar will feature Sicilian wines and Bohemia-brand beer.

A ban on hand heckling from the underwater audience will be strictly enforced.

“Japes and cat-calling were a tradition at the original Globe Theatre,” Blenny said, “but we’ll have none of that here. Anyone gesticulating or making rude gestures will be escorted to the surface.”