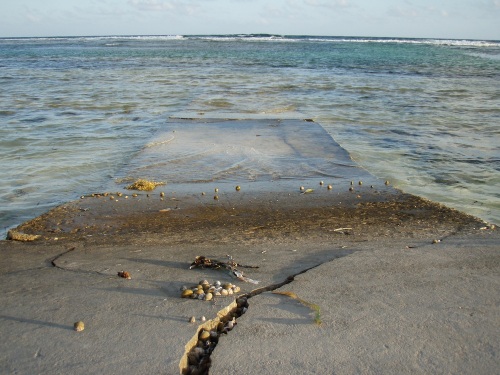 The Blacktip Island Community Players will perform a modern version of ‘The Somonyng of Everyman’ on a partially-submerged stage on the Caribbean Island’s west coast.

The Blacktip Island Community Players will perform the classic Medieval morality play ‘The Somonyng of Everyman’ November 21 – December 6 in their annual Fall Extravaganza.

“We felt ‘Everyman’ offered the perfect run-up to the December holidays,” said director Doris Blenny. “We made some slight changes to the original script to make it more relevant to our modern audience, though.

“The original had too much preaching and navel-gazing, so we tarted it up with a boat chase, a shootout and a stage-clearing sword fight finale.”

The characters have also been modernized.

“Death? Fellowship? Good Deeds? Who wants to watch that?” said Kay Valve, who plays the title character. “We substituted the Seven Deadly Sins to give it some zing.

“We made them island-specific Sins, too,” Valve said. “Sins we run into every day, a lot of times before lunch. Or breakfast.”

In addition to Valve as Everyman, the cast includes:

The play will be performed in its original Middle English.

“Aside from the plot and the characters, we wanted everything as authentic as possible,” Doris Blenny said. “We’ve had the cast studying Middle English language CDs for weeks.”

In a break with tradition, this year’s Extravaganza will be performed in the surf behind the former community playhouse.

“We had no choice,” Edwin Chub said. “The crowd burned the theater last year, and we’ve no money to rebuild the place. We managed to piece together bleachers on the beach, though. And performing in the sea does speak to our island heritage.”

Audience members are strongly encouraged to wear waterproof clothing as well as goggles or a scuba mask.

As ever, the production has been aided by local volunteers.

“We’re especially grateful to the school children who captured all the frigate birds for Gossip’s big entrance,” Mal LaTrode said.

Alcohol consumption is banned from the venue. Theater-goers will be given Breathalyzer tests prior to admission.

“They’ll find ways to sneak it in, though. They always do,” Blenny said. “That’s what sparked last fall’s ‘Tora, Tora, Tora!’ debacle. And the ‘Lawrence of Arabia’ melee the year before that.

Background music will be provided by local country-western band Duck on a Junebug.

Proceeds from the play will go to Habitat for Humanity of Blacktip Island.