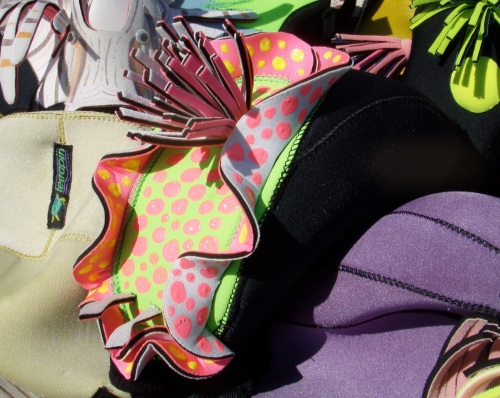 Hand-crafted costumes for ‘Nudibranch: The Operetta.’

Plexiglas helmets will provide the airspace for actors to sing.

“I’m continually astounded by the operatic and dramatic talent among dive staffs on this little island. We’re fast becoming the La Scala of the Caribbean.”

“The idea was to perform open-air,” Blenny said. “But then we thought, what better stage for sea slug-themed light opera than the reef itself?”

“Underwater is the proper setting,” co-writer and mezzo-soprano Catarina Porto said. “The water slows our movements and makes us more slug-like. The realism is uncanny.”

“It cuts down on drunks crashing the show, too,” said co-writer and contralto Alison Diesel. “That’s what ruined last year’s ‘Pirates of Penzance.’ I mean, it added realism and all, but it wasn’t right.”

“All the actors created their own costumes from locally-sourced materials,” costume master and tenor Payne Hanover said. “Some are coming up with colors and tuft configurations I honestly don’t think exist in nature. But that’s where art stops imitating life, I suppose, and we’re all about that.”

“The trick was finding a time when there was no hockey, basketball, baseball, rugby, soccer or cricket being broadcast,” Sand Spit bartender Corrie Anders said. “We tried to show the fall musical on a Saturday afternoon last year and a bunch of West Virginia University football fans about tore the place apart.”

Proceeds from the production will go to the Offenbach Scholarship for island divemasters bound for the Juilliard School.