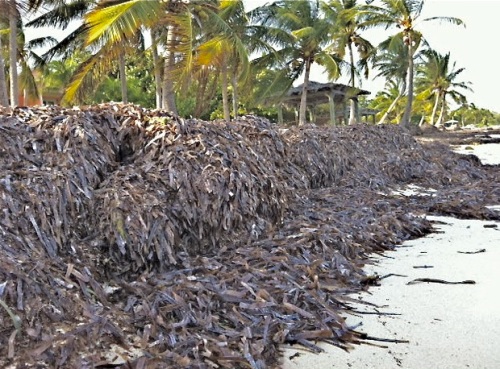 A Mount Rushmore-inspired Bangles homage in its early stages on the Eagle Ray Cove beach.

“The wind and the currents mound the seaweed up at The Cove like no place else on the island,” resort manager Mickey Smarr said. “There’s tons of it. Literally. Last year we hauled away 6,800 pounds in May alone.

“We decided to turn lemons into lemonade, so to speak, make it a social event for the whole community. Plus, it helps with cleanup.”

Four-person teams have half a day to create their most imaginative sculptures before the grass rots.

“You have to work it pretty quick,” sculptor Alison Diesel said. “It gets damn rank after a few hours in the sun, and they banned respirators a couple years back. And the sand flies – oi!”

Past winning entries have included a scale model of the Kremlin, a linear depiction of the Battle of Waterloo and a couchant fuzzy bunny rabbit.

This season’s entries are equally impressive.

“We’re finishing a Mount Rushmore-inspired sculpture of the Bangles,” Eagle Ray Divers divemaster Lee Helm said. “We’ve got Vicki, Debbi and Michael down brilliantly. We’re having a bugger of a time getting Susanna’s eyes and nose done proper, though. Right now she looks more like Robert De Niro.”

As with any island competition, emotions run high.

“Had no idea there was washed up Portuguese man-o-wars in that grass we was flinging,” sculptor Jesse Conlee said. “Hell, stung our hands, too. But no one talks about that. Just those kids got caught in the crossfire. A little rum and they were fine.”

“Rum does play a big role in the contest. No denying that,” Diesel said. “I’m not sure it’s a definite cause-and-effect thing, but the team that drinks the most while sculpting usually wins. And feels the sand flies less.”

Losers are required to haul away the turtle grass afterwards.

Spectators are advised not to stand downwind of the sculpture area. Tiperon Airways is providing airsickness bags for those who ignore the warning.