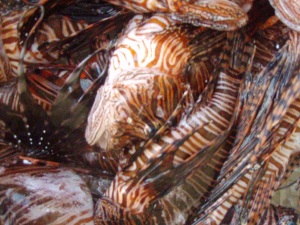 As part of the fight against invasive Indo-Pacific lionfish devastating Caribbean reefs, the Blacktip Island Agricultural Society will stage its inaugural Spring Fling Lionfish-Tossing Tournament Saturday, with proceeds going to the island’s chapter of the Society for Creative Anachronism.

The event is part of broader lionfish control efforts throughout the Caribbean.

“Our reefs are under siege from lionfish,” event organizer Buddy Brunnez said. “It made sense to combine the cull with a Medieval siege engine-building contest. Community groups raise money for their team, hand-craft a catapult from supplies found on-island, then launch their catch into the community vegetable garden.”

Team members on scuba will have one hour to spear as many lionfish as possible. They will then report to the garden site for weigh-in, counting and flinging.

“It’s absolute genius,” Eagle Ray Cove general manager Mickey Smarr said. “We’re culling so many the damn things, we’re up to our ears in lionfish. We’re sick of eating them. So are the tourists. The restaurants are glutted. Using them for fertilizer is the perfect solution.”

“It’s spring, the time of rebirth and renewal,” Agriculture Society president Marcia Seagroves said. “These lionfish will bind us all, via the vegetables we eat, to that ancient cycle of life and death. We’ll plow them into pulp to make sure they’re fully integrated in that cycle.”

“Any pre-gunpowder era flinging device is acceptable,” Brunnez said. “Most teams are going with simple onager-style catapults. Trebuchets are the top of the line, for payload, accuracy and old-fashioned esthetics. But they take a bit of know-how to get right.”

“We had to scrap our trebuchet,” said Val Schrader, Sandy Bottoms Resort team captain. “It generated so much force the lionfish were pretty much vaporized when we released the counterweight. It was beautiful from a distance, but the folks manning the sling weren’t too happy.”

“We’ve built a bamboo ballista based on an image from the Bayeux Tapestry,” said Blacktip Haven team member and island SCA president Jessie Catahoula. “Going for accuracy on multiple shots instead of putting all our fish in one sling, so to speak.”

The contest is not without its hazards, however.

“We’re making doubly-sure we clear the garden area of spectators after little Jimmy Cottonwick got impaled during a trial fling yesterday,” Brunnez said. “He was pulling weeds and took three lionfish to the back and one to the thigh. They’re still picking spines out of him.”