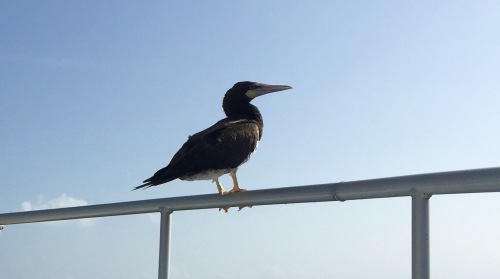 “It’s not quite 5K, but our attorneys advised us not to ask anyone on this island to run five kilometers,” event organizer Sula Beakins said. “Blacktip doesn’t have enough medical staff or infrastructure to handle anything like that. Nowhere in the Caribbean does.

“It’s a delicate business picking a starting time, as well. It has to be late enough for last night’s partiers to participate, but not so late in the morning to interfere with the next day’s parties.”

Running in costume was optional, but strongly encouraged. Only one of the 24 contestants arrived at the starting line dressed as a booby, but was unable to compete due to an unidentified woman dressed as a frigate bird pouncing on him and forcing him to disgorge his breakfast.

The top finishers were:

“I’m proud to run for the boobies,” Reg Gurnard said after winning. “This island’s boobies need all the support we can give them.”