Ruins Off Blacktip Island Coast May Be Atlantis Remnants 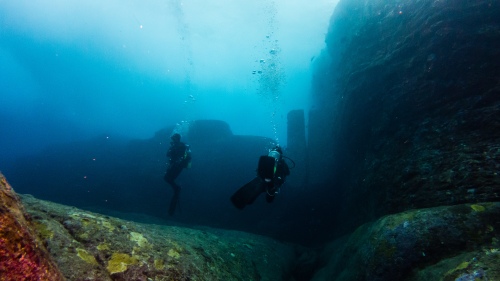 Cori Anders and other divers take measurements of the upright slab walls of the underwater ruins they discovered this week off Blacktip Island’s south coast. (photo courtesy of Vincent Lou)

“We were out diving for fun and stumbled across these cool architectural features,” Cori Anders said. “They were totally obvious, but it’s right out from Mango Sound, where the currents are ripping and people don’t dive much. That’s got to be how it stayed hidden for so long.

“The vertical slabs with super tight seams between them reminded me of that Yonaguni site by Okinawa,” Anders said. “There were way too many straight lines for it to be natural—that doesn’t happen in nature. Much. And there’s weird figures scratched into them, too. They’re absolutely man-made.”

“Judging from the video, the slabs are most likely layers of sedimentary rock and the joints are natural, parallel fractures,” Tiperon University-Blacktip marine science professor Ernesto Mojarra said. “Those vertical walls likely used to be horizontal layers before the softer rock beneath them eroded and they settled upright. There’s plenty of straight lines in nature, and Cori’s photos prove that.”

Some locals say ruins off the island’s coast are no surprise.

“Always been stories about ancient civilizations on Blacktip, other cultures that thrived here ages ago,” amateur Atlantologist Antonio Fletcher said. “Ruins out there could be part of Atlantis, you know. We’re in the Western Hemisphere, and close to the Bimini Road—we know that’s part of Atlantis.

“Close to the Bermuda Triangle, too,” Fletcher said. “Could be something similar, that zaps you to another dimension. The Blacktip Trapezoid, maybe. That’s why folks on this island get so crazy sometimes. The university already did thorium tests that show the ruins are 10,000 years old. Ernesto just won’t release the results. And how does he explain the drawings?”

“No tests were done because no tests are needed,” he said. “Those ‘drawings’ are natural scratches where parrotfish nipped at the algae. And the only place those rocks are zapping anyone is to the bottom of a rum bottle.

“It’s more likely to be a part of Atlanta than Atlantis. At least Atlanta’s real,” Mojarra said. “Why don’t we exhaust natural, scientific explanations before we jump to UFOs, aliens and Bigfoot?”

Dive operators, meanwhile, are primed to capitalize on the find.

“We got Ruins Diver and Atlantis Diver specialty courses drawn up,” Sclub Scuba Doo dive manager Finn Kiick said. “Plus special ‘Dive Atlantis’ trips. For an up charge, of course. And t-shirts. Nothing like this anywhere else in the Caribbean. We’re all over that.”