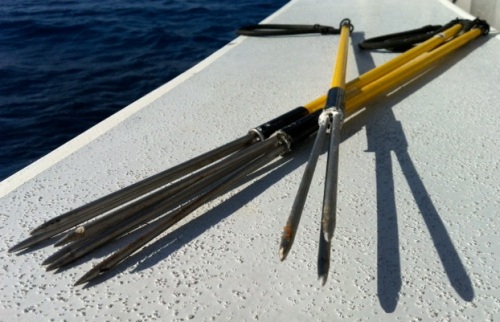 Some of the undocumented lionfish spears seized from Blacktip Island youngsters this week. The source of the spears has not been determined.

Blacktip Islanders were shocked this week to find the Caribbean island’s Toys for Tots bins had been filled with pole spears normally used for lionfish culling.

“What sort of monster would give spears to children?” said island resident Ginger Bass, a mother of three. “And why? Someone’s really out to ruin Christmas.”

The situation was made worse by delinquents overturning the bins and stealing the spears.

“Children raid the bins every year,” said retired Sgt. Maj. Beaugregory Damsil, who oversees the island’s Toys for Tots program. “The bins aren’t guarded, and the little scamps know toys are inside. Usually, the worst that happens is some tyke nicks a Tickle Me Elmo or something of the sort.

“This year, though, they’ve stolen lethal weapons and passed them around willy-nilly. With so many children running about with so many spears, falling and putting one’s eye out is the least of our worries.”

Island authorities are seizing the pole spears as they find them.

“I corralled a bunch of kids today playing cullers-and-lionfish,” Island Police Constable Rafe Marquette said. “Had to take three ‘lionfish’ to the clinic for patching up.

“We’re confiscating spears fast at we can, but things are nowhere near under control,” IPC Marquette said. “We’ve no idea who’s leaving the spears, where they’re getting them or how many are still out there.”

Fourteen spear-related injuries have been confirmed: 13 punctures, plus a skull fracture to a child blasted backwards after he speared an automobile tire. There are also unconfirmed reports of several punctured house cats.

The situation has left many locals shaken.

“The bigger issue’s how this destroys the island’s Christmas spirit,” Club Scuba Doo manager Polly Parrett said. “I mean, someone’s also running around stealing all our trees and ornaments. It’s like Christmas is being taken from us bit by bit.”

Island authorities would not comment on multiple reports of a man, wearing only a Santa coat and hat, lurking around toy collection centers earlier in the week, or that a small dog accompanying him may or may not have had a stick tied to its head.

“This situation’s volatile enough without crazy rumors,” IPC Marquette said. “All we know at this point is whoever’s responsible is a mean one, with a brain full of spiders and garlic in his soul.”